Did you ever wonder what happens to all the food that you eat? How does your body digest it and use it? How about the food requirements of other animals? Are they same for all? Obviously not! Animals cannot make food on their own. They depend on plants for their food either directly or indirectly. And therefore, nutrition in animals is said to be heterotrophic.

In humans, the type of nutrition that is found is called holozoic nutrition. It simply means eating or ingesting food and then digesting the food, to get the required nutrition. The digested food gets absorbed and assimilated, and finally, any waste is excreted outside.

When animals including humans ingest food particles, they have some form of digestive systems to break down the complex food particles into simpler particles. The digestive system varies from the lower organisms such as amoeba and paramecium when compared to other higher-order animals such as fishes, amphibians, humans etc. 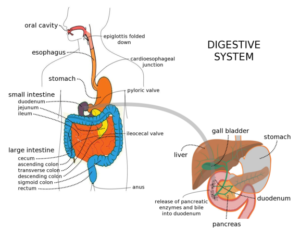 One important aspect of nutrition in animals is the digestion of food. Digestion is the process where complex food substances are broken down into simpler food molecules. It occurs through a proper set of organs and secretions from other associated organs. Digestion is an important process, as we humans cannot take in the complex food particles directly.

The food that you eat gives you the energy to do work and also helps in cell growth and cell repair. (You know that your body is made up of many cells and tissues.) If you are wondering as to how the digested food goes to other parts of the body, then it is the all-important blood that completes this function.

Parts of the Digestive System

The human digestive system consists of different parts such as the mouth or oral cavity, alimentary canal, stomach, large intestine, small intestine, rectum, and anus. There are other organs such as the liver, pancreas, salivary glands that play an important role in digestion.

They secrete enzymes which are nothing but biocatalysts. They help in digesting the food, which is generally in the form of carbohydrates, proteins, and fats.

The process of digestion starts right in the mouth. Food is ingested or taken in through the mouth. Here, teeth and salivary glands present. The teeth help in chewing and masticating the food. The salivary glands produce saliva that gets mixed with the food particles. Saliva has an enzyme called amylase that starts acting on the carbohydrates or starch.

From the mouth, this ball of food reaches the stomach after passing through the alimentary canal, which is a hollow tube-like structure. The alimentary canal shows movements called peristaltic movements, which are wave-like muscle contractions. In the stomach, there are some digestive enzymes and gastric juices secreted such as mucus, pepsin, HCl etc. These enzymes act on the protein part of the food, converting them into simpler proteins.

Know more about Transportation in Plants? 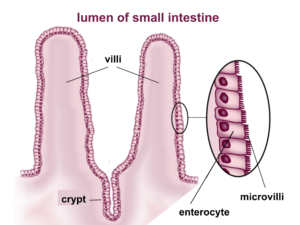 The various enzymes act on the food and the digested food is absorbed and assimilated in the small intestine. There are many small projections called the villi that help in the absorption of the digested food. There is an extensive network of blood vessels present here. This facilitates the easy absorption of the simpler food molecules from where it is sent to other organs for assimilation.

Any leftover undigested food goes into the large intestine. Here water is absorbed back into the system. The undigested waste is then stored in the rectum, from where it is ejected out of the body through the anus.

Q: Which part of the digestive system receives secretions from other organs? Write a few lines about it.

Share with friends
Previous
Application of Microbes
Next
Respiration