The soil has limited amounts of nitrogen. Plants and microbes compete for this nitrogen. Therefore, it is a limiting nutrient for both agricultural and natural ecosystems. Let’s understand how this available nitrogen is cycled in the ecosystem a concept known as nitrogen metabolism.

The main part of nitrogen metabolism is the Nitrogen Cycle. A molecule of nitrogen is made of two nitrogen atoms held together by a very strong triple covalent bond (N ≡ N). There are three main pools of nitrogen – atmosphere, soil and biomass. Nitrogen cycles between these pools in the following manner:

The above processes fix atmospheric nitrogen into the soil. This nitrogen is then taken up by plants and animals, consequently.

When plants and animals die, the organic nitrogen within them decomposes to ammonia. This process is ‘Ammonification‘ and it returns nitrogen back to the soil. Some of this ammonia evaporates and re-enters the atmosphere while a major part of it is converted by soil bacteria into nitrate as follows:

(i) First, ammonia is oxidised to nitrite by the bacteria Nitrosomonas and/or Nitrococcus.

(ii) Then, nitrite is further oxidised to nitrate by Nitrobacter.

These reactions are called  ‘Nitrification‘ and the nitrifying bacteria are ‘Chemoautotrophs‘. Plants absorb the nitrate thus formed and transport it to the leaves where it is reduced to ammonia. This ammonia forms the amine group of amino acids. Nitrates in the soil are also reduced to nitrogen during ‘Denitrification‘ by Pseudomonas and Thiobacillus. In this way, nitrogen keeps cycling in the ecosystem. 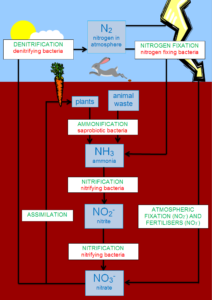 Only a few prokaryotes can use the atmospheric nitrogen as N2 and reduce it to ammonia. This reduction of nitrogen to ammonia by living organisms is ‘biological nitrogen fixation’. The enzyme it needs for this reaction – nitrogenase is present exclusively in prokaryotes and these microbes are called N2 – fixers. These N2 – fixers can be symbiotic or free-living. Some examples of free-living N2 – fixers are Azotobacter, Bacillus, Anabaena, Nostoc etc.

The most popular example in this category is the symbiotic relationship between Rhizobium and the roots of legumes such as sweet pea, garden pea, lentils. The association is visible as nodules (small outgrowths) on the roots. Another example is the microbe Frankia that also produces nitrogen-fixing nodules on the roots of non-leguminous plants.

Did you know that if you cut through a nodule, its central portion is red or pink? What gives it this colour? It is the presence of leguminous haemoglobin or leg-haemoglobin. Let’s learn a little more about these nodules.

Another form of nitrogen metabolism is nodule formation. Nodule formation involves several interactions between the roots of the host plant and Rhizobium. They are:

The energy required for the above reaction (8ATP for each NH3 produced) comes from the respiration of host cells. Also, the enzyme nitrogenase is very sensitive to molecular oxygen and therefore needs anaerobic conditions. The oxygen-scavenger called leg-haemoglobin protects nitrogenase from oxygen in the nodules.

Interestingly, this microbe lives as aerobic, free-living organism where nitrogenase is not functional. But during nitrogen-fixation, they become anaerobic, thus protecting the enzyme from oxygen.

What happens to the ammonia generated after nitrogen-fixation? It is protonated to form ammonium ion (NH4+) at physiological pH. Although plants can accumulate nitrate and NH4+ ions, NH4+ ions are toxic to them. Thus, it is in turn, used to synthesize amino acids in plants as follows:

(i) Reductive amination: Here, ammonia reacts with α-ketoglutaric acid to form glutamic acid in the presence of the enzyme – glutamate dehydrogenase.

(ii) Transamination: Here, the amino group of one amino acid is transferred to the keto group of a keto acid in the presence of the enzyme – transaminase. Asparagine and glutamine – the two most important amides in plants arise from two amino acids – aspartic acid and glutamic acid, respectively. Another NH2– radicle replaces the hydroxyl group of the acid to give an amide. The xylem then transports these amides that contain more nitrogen to different parts of the plant.

Question: What is the process of the reduction of nitrates in the soil to nitrogen?

Solution: The answer is “D”. Denitrification results in the conversion of nitrates in the soil to nitrogen.