Have you ever wondered why our atmosphere never runs out of oxygen? Well that’s because trees and plants produce oxygen, right? But what if I told you no new oxygen is ever produced, it is only recycled. In fact, our planet never produces any new element, they all just move in a cyclic pattern called biogeochemical cycles. Let us learn more about them.

What is a Biogeochemical Cycle?

A biogeochemical cycle or an inorganic-organic cycle is a circulating or repeatable pathway by which either a chemical element or a molecule moves through both biotic (biosphere) and abiotic (lithosphere, atmosphere and hydrosphere) components of an ecosystem.

Let us try to understand this definition. Firstly let us understand that the Earth only receives energy from the Sun, all other elements on Earth remain within a closed system. These chemicals, however, are the building blocks of life, they are the raw materials all living organisms use as nutrients to produce energy. These chemicals are called biogeochemicals. Some of the main elements that are in a cyclic pattern are Carbon, Oxygen, Hydrogen, Nitrogen, Phosphorous, Sulphur and Water. Let us now take a look at few of these cycles. 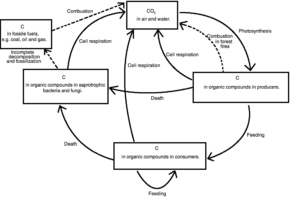 Carbon is exchanged among the biosphere, pedosphere, geosphere, hydrosphere and the atmosphere of the Earth through a biogeochemical cycle called Carbon Cycle.

How do you differentiate between organic and inorganic matter? Well, this is decided by the presence of carbon in the matter. Essentially all organic matter contains carbon. Carbon cycle is the cyclic pattern that carbon follows on earth. By following the carbon cycle we can also study the flow of energy as the energy needed for life is stored between carbon molecules in organic matter as proteins and fats.

Learn more about Air and Air Pollution here in detail.

Carbon is also present in air as CO2, and in oceans as carbonates and bicarbonates, that also dissolve to generate CO2. Carbon is also present in soil (lithosphere) as fossil fuels. The primary source of removal of carbon from the atmosphere is when CO2 is absorbed by plants during photosynthesis. The restock is done through respiration, combustion of fossil fuels, decomposition and chemical reactions that give out CO2. 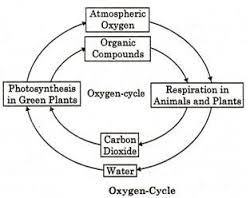 After carbon, oxygen is one of the most abundant elements on earth. About 21% of our air is composed of oxygen. It is also an atom in the molecule of water (H2O). Oxide compounds, such as CO2 also contain oxygen.

As we are aware oxygen is absolutely essential for all living organisms to survive. It is the main component in respiration. It is also the element that allows and assists combustion of any kind. Through photosynthesis, the replenishment of oxygen in the atmosphere is done, where oxygen is one of the by-products. In fact, photosynthesis and respiration are interdependent mechanisms that perform a unique and amazing balancing.

Nitrogen is available in abundance in our atmosphere (78%), however, this nitrogen is useless to animals and plants until it is converted to ammonia and other nitrogen compounds. This conversion process is called Nitrogen Fixation. And through a process is called denitrification, once these plants and animals are dead, this ammonia is broken down by bacteria and fungi and returned to the atmosphere as Nitrogen.

Learn more about Mineral Riches in the Soil here in detail.

There are still various other biogeochemical cycles such as water, rock, sulphur etc. The importance of these cycles is that they essentially support all life on the planet because without these cycles living organism would not get all the elements they need to survive.

Q: Which one of the following fixes CO2 into carbohydrates?

Solution: The correct answer is “d”. Rhodospirillum is an anaerobic photosynthetic bacterium that uses carbon dioxide as a carbon source and converts it to carbohydrates.