Just like any other organism, plants too grow in height and size over time. So how does plant growth occur? Or how flowers and fruits in a tree appear and fall periodically? All events in plants, right from the zygote stage to the full-grown plant take place in an orderly manner. This is called development. Development is the sum of growth and differentiation. Let us understand plant growth and its phases in more detail.

Plant Growth And Its Phases

Growth is the most fundamental characteristic of any living organism. It is defined as “an irreversible, permanent increase in the size of an organ or its parts, or even of an individual cell”. Generally, growth is accompanied by metabolic processes (catabolic and anabolic) that spend energy.

Plants have the unique ability to grow indefinitely throughout their life due to the presence of ‘meristems’ in their body. Meristems have cells that can divide and self-propagate. This is called ‘open form of growth’ because new cells are constantly added to the plant body by the cells in the meristem.

Did you know that the cells in a watermelon can increase in size up to about 3,50,000 times! On the other hand, a single apical meristem in maize roots can produce about 17,500 new cells per hour! In the first case, growth is in terms of the size of the cell whereas in the second case, it is in terms of cell number.

The cells in the root and shoot apex of a plant are constantly dividing. They represent the meristematic phase of growth. The cells in these regions have large nuclei and are rich in protoplasm and their cell walls are thin and contain cellulose. The cells in the zone just after the meristematic region represent the phase of elongation. The characteristics of cells in this zone are cell enlargement, increased vacuole formation and new cell wall deposition.

Just close to the phase of elongation, but away from the apex lies the phase of maturation. The cells in this region reach their maximum size with respect to their protoplasm and cell wall thickening.

The growth rate is defined as increased growth per unit time. An organism or its parts can give rise to more cells in a number of ways. The increase in growth may be arithmetic or geometrical and thus, the rate of growth can be expressed mathematically.

Following mitotic cell division, only one cell continues to divide while the other begins to differentiate. A simple example of this is the elongation of a root at a constant rate. When you plot this increase in length against time, you get a linear curve as shown below. This is expressed mathematically as – 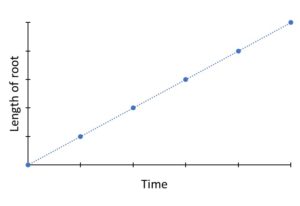 Most biological systems show an initial growth phase which is slow. This is the ‘lag phase’. This phase is followed by a period of exponential growth and is called ‘log phase’ or ‘exponential phase’. Here, following mitotic cell division both the daughter cells continue to divide.

However, due to limited nutrient supply, the growth slows down giving rise to the ‘stationary phase’. When we plot this growth, we get a sigmoidal curve or S-curve as shown below. This growth curve is typical for all cells, tissues, organs and is characteristic of an organism living in a natural environment. Mathematically, it is expressed as –

Differentiation is when the cells have stopped dividing and are beginning to mature and perform special functions. For example, to form tracheids (elongated cells that carry water in the xylem), the cells lose their protoplasm. They also develop strong, elastic cell walls to carry water across long distances.

Dedifferentiation is the phenomenon where differentiated cells that have lost their ability to divide, regain the capacity to divide under specific conditions. Example – fully differentiated parenchyma cells can go back to their earlier meristem form and divide.

Just like growth, differentiation in plants is also open. This is because cells that arise from the same meristem have different structures once they have matured. Also, the final structure of the cells at maturity is dependent on the location of the cell. For example, cells that are away from the root apical meristem become root caps, whereas cells pushed to the periphery become epidermis.

It is defined as all the changes that an organism goes through during its life cycle, right from seed germination to senescence. Development of plants (i.e. growth and differentiation) is influenced by extrinsic factors (light, temperature, water) and intrinsic factors (genes and plant growth regulators).

Question: What is the initial, slow phase of geometric growth called?

Solution: The answer is ‘b’. In geometric growth, the initial phase of slow growth is called ‘lag phase’.