Plant Growth Regulators are defined as small, simple chemicals produced naturally by plants to regulate their growth and development.

Plant Growth Regulators can be of a diverse chemical composition such as gases (ethylene), terpenes (gibberellic acid) or carotenoid derivates (abscisic acid). They are also referred to as plant growth substances, phytohormones or plant hormones. Based on their action, they are broadly classified as follows:

Note: Ethylene can be a promoter or an inhibitor, but is largely a Plant Growth Inhibitor.

All plant growth regulators were discovered accidentally. Let’s take a detailed look at each regulator and learn about it more closely:

Auxins were the first growth hormone to be discovered. They were discovered due to the observations of Charles Darwin and his son, Francis Darwin. The Darwins observed that the coleoptile (protective sheath) in canary grass grows and bends towards the source of light. This phenomenon is ‘phototropism’. In addition, their experiments showed that the coleoptile tip was the site responsible for the bending. Finally, this led to the isolation of the first auxin by F. W. Went from the coleoptile tip of oat seedlings. 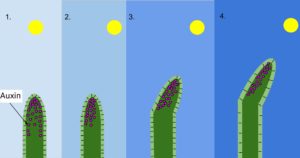 First isolated from human urine, auxin is a term applied to natural and synthetic compounds that have growth regulating properties. Plants produce natural auxins such as Indole-3-acetic acid (IAA) and Indole butyric acid (IBA). Natural auxins are found in growing stems and roots from where they migrate to their site of action. Naphthalene acetic acid (NAA) and 2, 4-dichlorophenoxyacetic (2, 4-D) are examples of synthetic auxins.

Note: The growing apical bud in higher plants inhibits the growth of the lateral buds. This phenomenon is ‘Apical Dominance‘. Removal of the apical bud allows the lateral buds to grow. This technique is commonly used in tea plantations and hedge-making.

Why do we get certain fruits in one particular season and not the others? Learn about Photoperiodism here to know the answer.

It is the component responsible for the ‘bakane’ disease of rice seedlings. The disease is caused by the fungal pathogen Gibberella fujikuroi. E. Kurosawa treated uninfected rice seedlings with sterile filtrates of the fungus and reported the appearance of disease symptoms. Finally, the active substance causing the disease was identified as gibberellic acid.

There exist more than 100 gibberellins obtained from a variety of organisms from fungi to higher plants. They are all acidic and are denoted as follows – GA1, GA2, GA3 etc. GA3 (Gibberellic acid) is the most noteworthy since it was the first to be discovered and is the most studied.

F. Skoog and his co-workers observed a mass of cells called ‘callus’ in tobacco plants. These cells proliferated only when the nutrient medium contained auxins along with yeast extract or extracts of vascular tissue. Skoog and Miller later identified the active substance responsible for proliferation and called it kinetin.

Three independent researchers reported the purification and characterization of three different inhibitors – Inhibitor B, Abscission II and Dormin. Later, it was found that all three inhibitors were chemically identical and were, therefore, together were given the name abscisic acid. Abscisic acid mostly acts as an antagonist to Gibberellic acid.

A group of cousins showed that a gaseous substance released from ripe oranges hastens the ripening of unripe oranges. Consequently, they found that the substance was ethylene – a simple gaseous Plant Growth Regulator. Ripening fruits and tissues undergoing senescence produce ethylene in large amounts.

Ethylene regulates many physiological processes and is, therefore, widely used in agriculture. The most commonly used source of ethylene is Ethephon. Plants can easily absorb and transport an aqueous solution of ethephon and release ethylene slowly.

Question: Match the plant growth regulator and the scientist associated with it.

Share with friends
Previous
Photoperiodism
Next
Factorization of Polynomials