Coniferous forest generally flourishes in Taiga type of climate. This climate has severe winters and a brief period of summer lasting only for 3 to 4 months. Heavy snowfall occurs during winter and temperature falls to about -30  to -40 degrees.

Coniferous trees very tough and are one of the largest living species of trees in the world. Almost all of the conifers trees have seeds on the surface of their scales, this gives them cone-like appearance. The cones look like seed cones. The male and female reproductive structures are present in the cone. 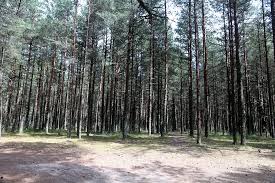 Due to conical shape, trees can survive the subarctic climate. The leaves are thick, leathery and needle-like to check excessive transpiration. The branches of trees are upside down like a cone to protect breaking under the weight of the snow.

Also, the wood is soft but the bark is thick to protect from the cold. The soil is poor in its nutrient content and humus. Due to leaching, the soil is very acidic. The absence of sunlight prevents the growth of underneath shrubs.

Pollens are produced in the male cones and is transported by the wind to the female cones of another tree to fertilize them. Once fertilized, female cones begin to grow seeds. The seeds within a female cone take up to two years to grow to maturity.

Coniferous forest is the source of the world’s largest timber and pulp production. Conifers grow fast and they have good wood properties, therefore they are ideal for timber. Therefore we know the coniferous trees as timber world’s softwoods.

Conifer trees are important because the process of photosynthesis removes carbon from the atmosphere and their giant trunks can store immense amounts of carbon for hundreds if not thousands of years. Conifers also provide important habitat and shelter for many animal species.

Q. Why are Coniferous trees the main source of wood pulp and timber?

Ans: Coniferous forest exists in the subarctic region like Canada, Scandinavian Europe, central and Southern Russia ( Siberia), etc. The outer bark of the tree is very hard but the inner part is soft. We use the inner part for making wood pulp and use the outer part as a hardwood.

Also, there is not much growth of shrubs underneath, making cutting and commercial use of these forests easier. No doubt, region with coniferous forest in the USA and Canada are the largest timber producing regions of the world.

Share with friends
Previous
How to Calculate Dice Probabilities?
Next
What is Singular Matrix?