The simplest and easiest case of dice probabilities is the chance of getting a particular number with one dice. In probability, the basic rule is that one must calculate it by looking at the number of possible outcomes in comparison to the desired outcome.

Dice presents six possible outcomes. Furthermore, the interest of the individual would be only for one outcome irrespective of the choice of number. A dice probability calculator would be quite useful in this regard. 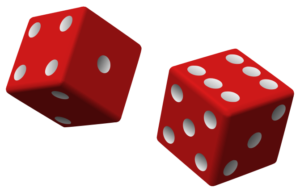 The formula one may use in this case is:

Probability = Number of desired outcomes ÷ Number of possible outcomes
Therefore, the odds of rolling a particular number, if the number is 6, this gives:
Probability = 1 ÷ 6 = 0.167

Probabilities are available as numbers between no chance and certainty. Furthermore, no chance resembles 0 and certainty resembles 1. An individual can multiply this by 100 to derive a percentage. Consequently, the chance of rolling 6 on the dice is 16.7 per cent.

The probabilities certainly get a little more complex to work out when two dice are involved. The calculation of independent probabilities takes place when one wants to know the likelihood of getting two 6s by rolling two dice.

Independent probabilities have the rule that one must multiply the individual probabilities together to achieve the result. Therefore, the formula for this is:

If an individual wants to know the likelihood of getting a particular total sore by rolling two or more dice, then one must go back to the simple rule.

This simple rule is probability= number of desired outcomes divided by the number of possible outcomes. Again, the use of a dice probability calculator is crucial here.

Counting the number of outcomes one is interested in requires more work. If an individual desires a total score of 4 on two dice, then this is achievable by rolling 1 and 3, 3 and 1, or 2 and 2.

For rolling a 4, there are three ways to get the outcome one desires. Consequently, there are 36 possible outcomes. The work out of this is as follows:

Q1 Which of the following statements is not true with regards to dice?

A1 The correct answer is option A., which is “the probabilities get easier to work out when two dice are involved”.