The term ‘personnel’ refers to a group of people working together, instead of one person. The Key Managerial Personnel are the decision makers. They are accountable for the smooth functioning of company operations. 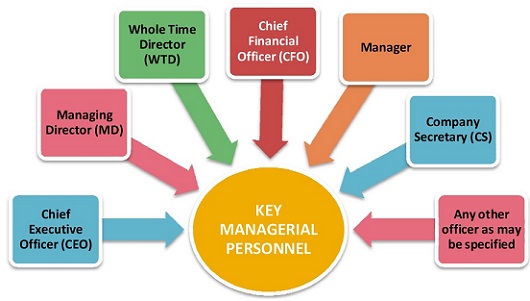 Under Section 2 of the Companies Act 2013, Key Managerial Personnel in reference to a company are as follows:

He is also responsible for innovating and growing the company to a larger scale. In many countries, a managing director is also called a Chief Executive Officer (CEO).

A company secretary is a senior level employee in a company who is responsible for the looking after the efficient administration of the company. The company secretary takes care of all the compliances with statutory and regulatory requirements.

He also ensures that the targets and instructions of the board are successfully implemented. However, in some countries, a company secretary is also called a corporate secretary.

A Whole Time Director is simply a director who devotes the whole of his working hours to the company. He is different from independent directors in the sense that he has a significant stake in the company and is part of the daily operation. A managing director may also be a whole time director.

Section 203 of the Companies Act 2013 has the provisions for the appointment of key managerial personnel. The Board appoints them. Also, the Board of Directors is responsible to fill any vacancies in the KMP within a period of six months.

It is mandatory for any listed company and any company with a paid up capital of more than or equal to 10 lakhs to appoint a whole time KMP. Further, a company with at least 5 lakhs paid-up capital is required to employ a full-time company secretary(who is also a KMP).

The KMPs are basically are basically responsible for taking the most important decisions and managing all the employees. They are also liable if they do not follow compliances laid down by the Companies Act 2013.

The growth and development of the company depend on the effectiveness of the KMPs at their jobs. The main responsibilities and functions of the KMP are:

Question: Which roles in the company constitute the Key Managerial Personnel?

Answer: Under Section 2 of the Companies Act 2013, Key Managerial Personnel in reference to a company are as follows: