A lot of times, you might have come across metals in your home or anywhere else, that tend to lose their lustre or get covered with a blackish brown coloured layer. Ever pondered what is this layer covering your metal? This blackish brown layer that covers the surface of the metals is known as Corrosion. This is not the technical definition of Corrosion, but layman meaning of it. So, what is the meaning of Corrosion and what are its prevention method? Let’s understand!

Table of content
1 Suggested Videos
2 What is corrosion?
2.1 Browse more Topics under Electrochemistry
3 Examples of Corrosion
4 Corrosion Prevention Methods
4.1 By surface coating
4.2 By connecting metal to a more electropositive metal
4.3 By forming insoluble phosphate or chromate coating
5 Mechanism of Corrosion
5.1 (i) At the anodic region
5.2 (ii) At the cathodic region
6 Solved Examples for You

Some of the metals that we use in our day to day lives are malleable, strong and ductile. So, when we use these metals, they get exposed to the environment. With the passage of time, they lose their shine and get covered with a coloured layer on them. Some of these metals even lose their strength and become brittle or weak. 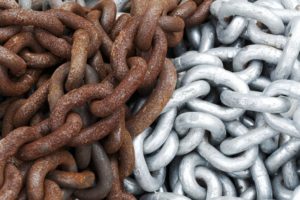 This happens because of the chemical interaction between the metals and their environment. So, the spontaneous destruction of metals as a result of the interaction with the environment is called corrosion. It usually occurs on the exposed surface. If the upper layer of the metal gets corroded, the inner surface of the metal also gets exposed. As a result of this, it tends to continue up to the depth of the metal. The 3 most common types of Corrosions are General Attack, Localized, and Galvanic Corrosion.

Some of the most common examples of corrosion are:

There are a number of ways to protect the metals from corrosion. Here we’ll discuss some of the most commonly used methods.

You can prevent the corrosion of the metal by coating their surface using any of the following:

For instance, you can prevent the surface of iron from corrosion by depositing a thin layer of chromium, zinc or nickel on it. Similarly, brass or copper can be protected by coating it with a thin layer of tin. In our country, tinning of brass is a very common practice.

By connecting metal to a more electropositive metal

The third method of prevention is by treating the metal surfaces with phosphoric acid. It forms an insoluble phosphate coating on the surface which protects the metal from corrosion. You can also form a thin chromate layer to prevent the metals from corrosion.

Several theories have been advanced to explain it over the period of time. However, the modern view which is known as the electrochemical theory seems more practical. Let’s understand this theory with the help of an example of rusting of iron.

Water containing oxygen a and carbon dioxide acts as an electrolyte and helps in the flow of electrons. The formation of rust on the surface of iron occurs through the following steps.

(i) At the anodic region

Iron in contact with water forms an anode and gets oxidized to Fe2+.

(ii) At the cathodic region

At this cathodic portion of the surface, oxygen in the presence of H+ ions (produced due to the ionization of water molecules) gets reduced to form H2O.

The overall reaction of the local cell is the sum of the cathodic and anodic reactions.

Fe2+ ions move through the water on the surface of the iron sheet. Presence of electrolytes (e.g., sodium chloride, SO2, CO2 etc.) in water helps in carrying more current through the local cell on the surface of the iron. The increased flow of current enhances the rate of corrosion. The Fe2+ ions are further oxidized by atmospheric oxygen to Fe3+, and form hydrated iron(III) oxide, expressed as Fe2O3.xH2O. The hydrated ferric oxide is called rust.

H+ ions produced in the above reaction help further in the rusting of iron. Impurities present in iron also enhance rusting by setting a number of localized cells. Pure iron does not rust.

Question: Explain the types of corrosion

Answer: There are three types of corrosion

In general corrosion, the effect can be seen on the entire surface of the metal.

On the other hand, in local corrosion, the effect is confined to the localized spot-on the surface. On the whole, corrosion happens to bring in huge damage to ships, bridges, buildings, and several other things made of iron.

In Galvanic Corrosion, two different metals come into contact with each other placed in the electrolyte.