In Python, void functions are not exactly the same as functions you see in C, C++ or Java. Meaning to say, if the function body does not have any return statement then a special value None returns when the function terminates. This article will throw light on void functions in detail. 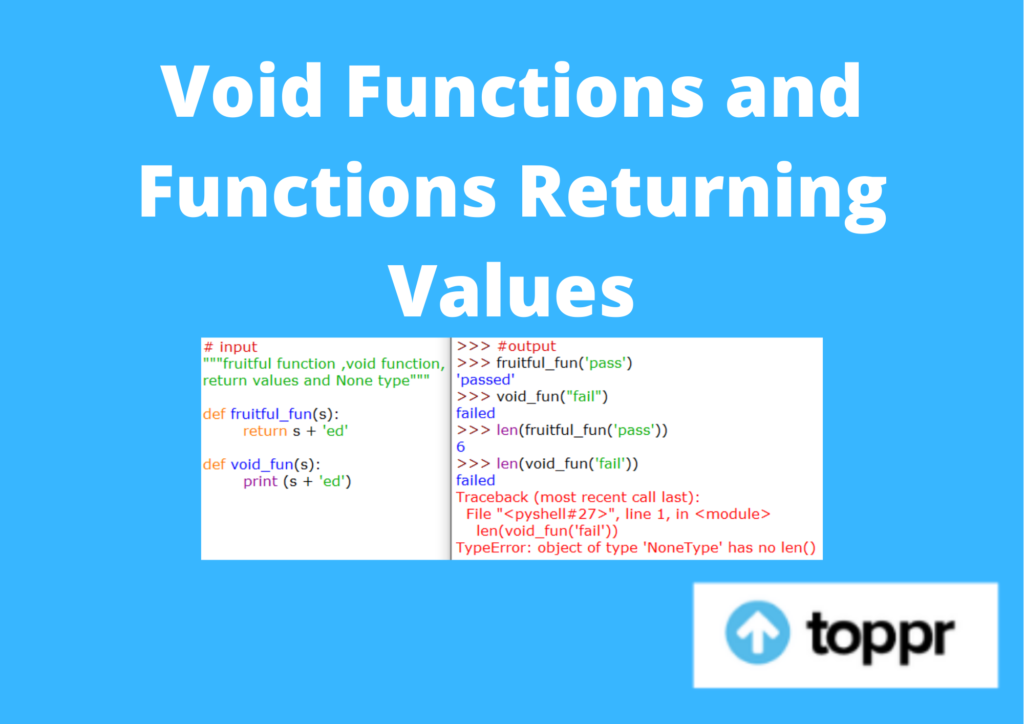 You will see that in Python, None refers to a literal kind of type NoneType which comes in use for denoting the absence of a value. Moreover, it is generally assigned to a variable for denoting that the variable does not point to any object.

Through the program given below, you can see how it shows that void functions return None:

Moreover, add () function certainly returns None. Thus, one can say that in Python, all functions return value whether usage of the return statement is done or not. But, this does not imply that one can make use of void functions like a value-returning function.

Moreover, some functions take up more than one argument. For instance, the math module comprises a function which we refer to as pow which takes two arguments, the base and the exponent.

max can be sent any number of arguments, which separates by commas, thus, it will return the maximum value sent. Similarly, the arguments may either be simple values or expressions.

Moreover, in the last instance, you will see 503 is returned. Thus, it is larger than 33, 125, and 1. Please note that max also works on lists of values. In addition, functions like range, int, abs all return values that can come into use for building more complex expressions.

Therefore, you see that a significant difference between these functions and drawSquare is that the latter was not executed as it was required to compute a value. Alternatively, drawSquare was written for executing a sequence of steps that cause the turtle to draw a particular shape. Further, we sometimes refer to functions returning values as fruitful functions.

Question 2: How do you pass a value back to a function in Python?

Answer 2: In order to do that, one has to explicitly pass the return value into the second function. The function returns a value but it does not create the symbol in any kind of global namespace as your code assumes. One does not have to actually capture the return value in the calling scope and then use it for subsequent operations.