We have all had our parents ask us to ‘get ready for school quickly’ or to ‘play carefully’ or to ‘do homework regularly’. These words that you hear so often – quickly, carefully, regularly, are all called ‘adverbs’. Just like nouns, verbs, pronouns, and adjectives; adverbs are also one of the different parts of speech. Let’s learn more about the formation of adverbs and how they are used in sentences.

An adverb is a word that modifies a verb, an adjective or another adverb. In other words, adverbs describe actions or other descriptive words. For example – Manav runs slowly. Here the word ‘slowly’ describes the action of running and therefore, is an adverb. 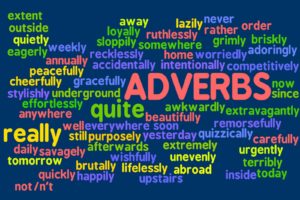 Sometimes, the adjective ends in ‘y’. In these cases, replace the ‘y’ with ‘i’ and add ‘ly’. Examples are as follows,

The adverb for the adjective ‘good’ is ‘well’. Examples –

Question 2: Fill in the blanks with the best adverb from the brackets.

Share with friends
Previous
Introduction to Accounting
Next
Kinds of Adverbs