Before we get into Adverbs, do you know what a verb is? A verb is basically a word or a group of words that describes an action, event, or situation.

Table of content
1 Suggested Videos
2 Examples
3 Browse more Topics under Adverbs
4 What is an Adverb?
5 How Adverbs
6 When Adverbs
7 Where Adverbs

Now that we have some idea of the Verb, we can get into the Adverb.

What is an Adverb? 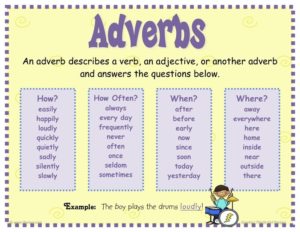 An Adverb is a word that qualifies the verb. What does that mean? This means that an adverb shows how, when and where some action, event or situation happened. Let’s understand it with the help of a few examples:

All these words are describing how the action was done. Let’s give you some more example adverbs and you can try forming sentences around a couple of them before going further to soak in what you learnt:

Here’s a fun fact: Although most of the adverbs end in -ly, there are plenty others that do not. So don’t get fooled by Mr. -ly.

After covering the two categories above, it must have become obvious to you what Where Adverbs are like. As you must have guessed, these are the adverbs that show the location of the verb. For example,

You will further learn how Adverbs also modify not only verbs but adjectives and other adverbs as well. Stay tuned to Toppr Guides, we have more interesting topics on Adverbs coming soon.

Share with friends
Previous
The Definite Article
Next
Kinds of Adjectives