A shift in demand curve can be a complex concept to understand. Therefore, it is important to start with the basics of demand and equilibrium.

In general sense of the term, ‘demand’ means the desire, the need, the want or the requirement for a commodity. In an economic sense, demand refers to the desire for a commodity. This desire is a combination of the ability and willingness to pay for it.

For example, the willingness by car but does not have enough resources to buy the same.

Some of the factors that affect the demand and the demand curve are as follows: 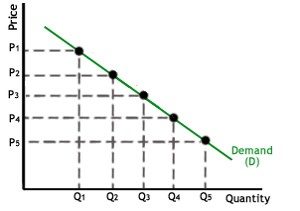 The shift in Demand Curve

There are 2 types of shifts:

Extension and Contraction in the demand curve 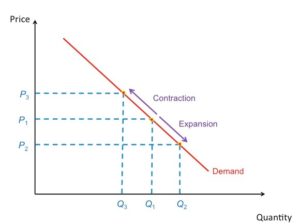 One should remember that the extension and contraction in the demand or demand curve, usually, takes place as a result of only price changes, when all the other determinants of demand remain constant. Some of these determinants are tastes, income, propen­sity to consume and prices of the related goods.

When these other factors remain constant, it means that the demand curve remains the same. In other words, it does not change its position; and it is only the consumer who moves downward or upward on it.

The shift in the demand curve or the change in the demanded can be due to any other factors affecting the demand, while the price is constant is called “Change in Demanded”.

The change in demand results in the shift of demand curve upwards (increase) or downwards (decrease). 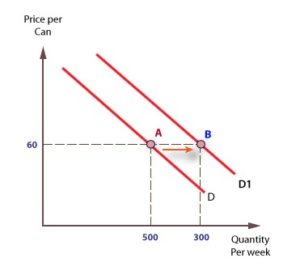 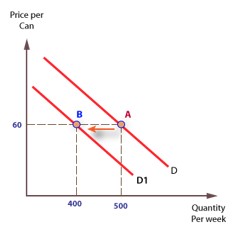 The demand curve change means an increase or decrease in the volume of demand from its equilibrium. There, however, exist some determinants other than the price of the commodity.

These determinants affect the quantity of demand, like the income of consumers, the taste of consumers, preference of consumers, population, technology, etc. Due to the influence of these, the demand or the supply of a product changes, consequently resulting in demand curve shifts.

Questions on Shift in Demand Curve

Q. When does contraction in the demand curve occur?

Q.When does the demand curve shift to the right?

Answer: The demand curve shifts to the right when the price of a product remains constant but the quantity demanded of the product increases.