The Employees State Insurance Act, 1948 is beneficial and social legislation. Its main aim is to provide economic security to people who work in certain factories and establishments. The Act contains several important definitions and provisions that regulate these workers. It basically provides for payment of benefits to workers in cases of sickness, maternity, injury, etc. 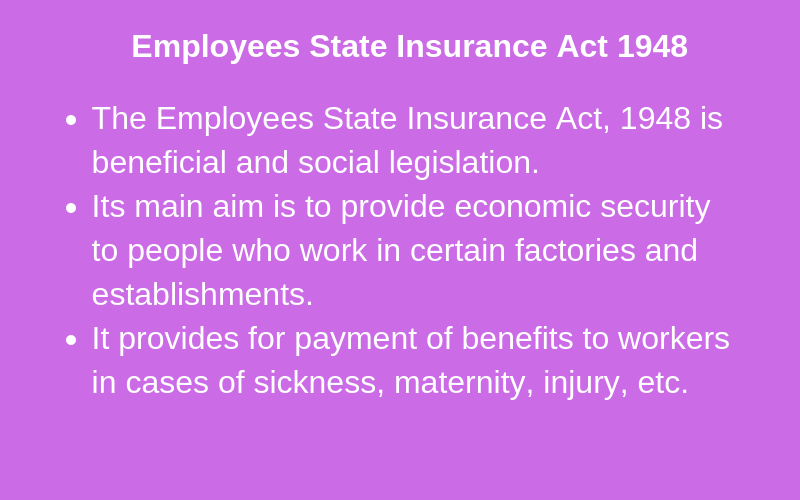 Pregnancy which leads to the birth of a living child is called “confinement” under this Act. It can also mean the birth of a child (living or dead) after 26 weeks of pregnancy.

Principal employers under this Act have to pay a sum of money to the Employees State Insurance Act Corporation according to relevant provisions.

This money is basically later payable to employees by the ESI Corporation for their benefits. Every employer to whom the Act applies has to make this contribution.

This important definition describes the Employees State Corporation that this Act has set up. This corporation has several important powers and duties.

In case a worker under the Act dies during employment, the ESI Corporation pays some money to his dependants. In order to understand who must receive this money, we must know who these “dependants” are.

According to the Act, dependants are certain relatives of a deceased worker. These include his widow, a son below 25 years of age, an unmarried daughter and his widowed mother.

A son/daughter above 25 years can also be a dependant if he/she is wholly dependant on the worker. In certain cases, dependants can also be a minor illegitimate child, minor sibling, a parent other than widowed mother, etc.

An employee can receive financial support under this Act for specific injuries that occur in employment only.

Hence, the Act refers to them as “employment injuries”.

This is a very important definition because only “employees” under the Act can claim compensation thereunder. An employee is basically a person who is employed for wages in relevant factories/establishments.

Furthermore, there are some additional requirements depending on the nature of the employee’s services.

For example, an employee may directly work permanently for the principal employer or may work temporarily on contract.

There are certain employees who are not liable to pay a contribution to the ESI Corporation under this Act. These employees are called as exempted employees.

The definition of “family” is very similar to the definition of dependants. It includes a worker’s spouse, minor child, unmarried daughter, dependent parents, minor siblings, etc.

A “factory” means any premises (or its precincts) wherein 10 or more employees work or have been working. These workers should be in employment for the preceding twelve months.

Furthermore, some manufacturing process must take place on such premises. Mines or railway running sheds, however, cannot come under the definition of factories.

An insured person under this Act is basically an employee to whom contribution is payable. Furthermore, he can claim all other benefits under the Act.

A principal employer is generally the owner or occupier of a factory to which the Act applies. It can also include the owner’s managing agent or factory manager and legal representative of a deceased owner/occupier.

Sickness basically means a condition for which an employee has to undergo medical treatment. He may even have to abstain from working during the duration of such sickness.

There are certain kinds of factories which work seasonally for some specific purposes only. These include manufacturing processes like cotton ginning, cotton/jute pressing, manufacturing or coffee, etc.

Furthermore, this includes a factory that works for not more than 7 months in a year in similar pursuits.

Wages include remuneration payable to an employee in cash under the terms of an express or implied contract of employment.

It may also include all other amounts payable to employees as wages under other laws. However, wages do not include pension, traveling allowances, gratuity and other similar sums.

The ESI Act contains a few categories of disablements for which employees can claim compensation. These may be either permanent or temporary. Permanent disablements may further be either partial or total.

Permanent disablement means disablement of permanent nature which affects an employee’s earning capacity. Part II of the Second Schedule deals with these injuries, whereas Part I describes permanent total injuries.

Question: Mention the missing word in these following statements.

(b) The widow, unmarried daughter, minor son and widowed mother of a deceased employee are his __________.