You have had geography as a subject, you’ve studied it. But do you know what are the features of geography? What exactly is geography? Let’s find out more about Physical Features of Geography.

Geography is the study of land, environment, and the earth. Geography is a systematic study of the Universe and its features. It has been associated with cartography and place names. Although many geographers are trained in toponymy and cartology, this is not their main preoccupation. 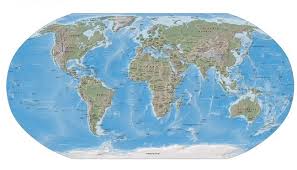 Geographers study the space and the temporal database distribution of phenomena, processes, and features as well as the interaction of humans and their environment.Geography as a discipline can be split broadly into two main subsidiary fields: human geography and physical geography.

Physical geography is one of the two major sub-fields of geography. It is a branch of natural science. It deals with the study of processes and patterns in the natural environment like the atmosphere, hydrosphere, biosphere, and geosphere, as opposed to the cultural or built environment, the domain of human geography.

Q1. Which one of the following statements is not correct?

Sol: The correct answer is the option ”b”. All the statements are true except the statement which says conglomerate is the best example of organically formed sedimentary rocks.

Q2. Sedimentary rocks are formed from sediment accumulated over long periods, usually under water. Choose correct statement(s) regarding it
(1) Sedimentary rocks are classified into three main categories.
(2) Origin and composition form the basis of classification.
(3) It has the highest chance of retaining fossils.
Select the correct answer using the codes given below.