What do you know about kings and kingdoms? As citizens of modern India, we hardly have witnessed any real kings, who wore crowns. However, our past is glorified with many such kings and kingdoms. A kingdom is actually a piece of land only which is ruled by either a King or a queen. In ancient India, there were many new kings and kingdoms. Let’s find out more about New Kings and Kingdoms.

The Appearance of New Dynasties

There were appearances of  New Kings and Kingdoms. In different regions of the Indian subcontinent, there were big landlords and warrior chiefs by the 7th century. They were mainly Samantas or subordinate to a king. Hence, all the existing kings often acknowledged them. The kings received a lot of gifts from them. The kings also received military support from them. 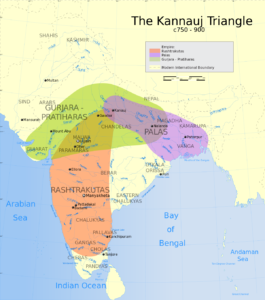 Administrations inside the Kingdom

The king at the top of the hierarchy accepted and held big titles like Maharaj-Adhiraj. These mighty kings shared their power with their Samantas and with an association of peasants. There were many producers who were convinced to surrender. The resources were usually obtained from what they produced. Then they used these resources to establish the king financially and for the construction of temple and forts. Therefore, these resources were important.

For Eras, the dynasties like Gujara–Pratihara, Rashtrakutas, and Pala fought for the control over the Kanuj. The war had three parties involved. Therefore, it is known as a tripartite struggle. It was a long drawn conflict. Almost every year, Sultan Mahmud of Ghazni raided the subcontinent and looted the temple also.

They looted the various temples like Somanath, Gujarat, and Mahmud. Other kings like Chauhan were also engaged in warfare. They ruled over the region around Delhi and Ajmer. The Chauhans were engaged in conflict with the Chalukyas of Gujarat and the Gahadavalas of western UP. Prithviraj 3 was a popular Chauhan ruler. In 1191, he defeated Afghan ruler Gohri. However, in 1192, he lost to him.

The Chola Dynasty was in power from the latter half of the 9th century to the beginning of 13th century. Cholas are the successors of Vijayawada. They conquered the neighbouring regions. They were from a small family of Uraiyur. This kingdom grew to new size and power.

Rajaraja was the most powerful Chola ruler. He extended control over most of the areas. His son, Rajendra, occupied Srilanka along with those countries of Southeast Asia. They continued to hugely expand the kingdom by raiding the Ganga Valley. The Chola empire’s bronze statues and temples stand as a testimony to its art and architecture.

Q1. In the Chole Empire, what are the required qualifications to become a member of the committee of the Sabha?

Sol. The following qualifications were necessary to become a member of the committee of the Sabha in Chole Empire:

Share with friends
Previous
Clothing: A Social History
Next
New Kings and Kingdoms