It took us 71 years to achieve independence from the British Raj. But even after we became independent, there was a class of people especially women who still hadn’t achieved independence and even today are struggling for it. However, there were a few reformers who tried to reform our society for the good and have succeeded to a large extent. Let’s find out more about women, reform, and the caste system in India. Women’s status in India has been changed several times. From the decline in status from ancient to medieval times to promotion of equality by social reformers like Savitibai Phule, Raja Ram Mohan Roy, Swami Vivekananda, etc.

During the Vedic period, they had equal rights. There wasn’t any discrimination based on gender. Women were equal in all aspects of life. By studying ancient works of grammarians like Patanjali and Katayayna, we can conclude that women were sent to school. Women even had the right to choose their own husband and practice live-in relationships.

However, that changed in the medieval times and women were considered as the weaker gender. Women were also restricted from a lot of religious practices. Some women were forced to practice Sati and Jauhar. Widow remarriage was prohibited. Child marriage was common. Old men married young girls forcefully.

During the British Raj, many reformers came ahead to fight the injustice and inequality against women. For example, Raja Ram Mohan Roy protested against the practice of Sati which led to the passing of the Act banning the practice of Sati. Mahatma Jyotirao Phule started the first school for girls. His wife Savitribai Phule taught in his school. The society was against this. Other reformers who fought against inequality were Maharishi Dhondo Keshav Karve, Vireshlingam Pantalu, etc. 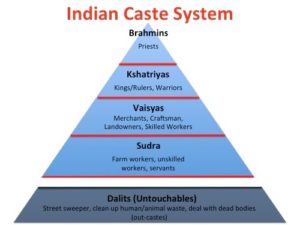 The Caste System in India is in hierarchal form. It basically consists of four Varnas i.e. Brahmans (Priests), Kshatriyas (Kings, Knights, etc), Vaishyas (Merchants, Landlords, craftsman, etc) Shudras (Maids, Farmers, Workers, etc) and the people who didn’t fit in these categories were the Dalits or the untouchables (Sweepers, People who dealt with dead bodies, etc).

Life of a lower caste person was worse than an animal’s life. They were constantly harassed in the name of the caste system. Many reformers were against this. Jyotirao Phule said that people who considered themselves as “Aryans” have come from foreign lands. And the lower caste people are the real natives of India. Dr. Baba Saheb Ambedkar tried to eradicate social taboos like untouchability and caste restrictions. Periyar supported equality for the untouchables.

India has been a victim of a lot of social problems like inequality against women and people of lower castes and tribes. Many reformers had come ahead to fight all these problems. For example, Periyar E.V. Ramaswamy tried to destroy the inequality against untouchables. Social reformers like Raja Ram Mohan Roy, Dayanand Saraswati, Veeraslingam Pantulu, Pandita Ramabai, Mumtaz Ali, Ishwarchandra Vidyasagar, etc supported equality for women and eradicate problems like social problems like Sati, child marriage, dowry, etc.

Q. Who were considered as untouchables?

Ans. Dalits were considered as untouchables.