Do you know what is used to model the world around us? Yes, algebra it is. During the archaic times, people happened to develop some of the most powerful tools of mathematics to describe some prominent activities and events. Similarly, in the modern world, math plays a crucial role.

For instance, understanding the concept of the slope will help you design everything from the ramps to the football stadiums or the skate parks. There is an element of math in everything around us. Be it our cars or computers, nothing runs without math. However, behind what happens every day and behind the extraordinary, there is algebra. Let us now give more to the introduction to algebraic expressions.

Algebra is an operation that comprises of finding a solution to the problem with the help of equations, variables, and expressions. So, here we’ll tell you about the expressions and the variables of algebra along with the types of expressions that are used in algebra.

Algebra is a branch of mathematics that deals with the operations on the sets of relationships and numbers between them. How is this different from arithmetic? Arithmetic is the kind of math that you already understand. In every case, simple numbers can be used to describe the things.

This type of mathematics is arithmetic. It is indeed the best tool to help you figure out things. However, sometimes this can be a little time-consuming. Moreover, sometimes, arithmetic isn’t enough to get answers. In some cases, information is complex, and there are no exact values to describe that information, action or situation.

In such a case, algebra will come to your rescue. Now, instead of making a pie, you use the same apples to start an orchard in your backyard. But we don’t know the number of seeds that are there or the number of those that will sprout out.

We can either wait a year and then go on to count the trunks or write a mathematical expression of it right now. So, how will you describe the number of trees that grow in the orchard or the average germination rate for the apples or the number of seeds in the apples when the average rate of germination of the apples is 50%. In this case, you can expect to grow 0.5s apple trees.

Now, the equation will be:

It is because of algebra that you have your answer. In math, the unknown amounts will be given variables such as t and s. Now, what is a variable? A variable is any symbol or less of an amount that is unknown and may be variable. The commonly used variables are x, y, and z.

Greek letters such as α, β and λ are also used as variables. However, the letter you choose is immaterial and you can pick any letter as required. So, the branch of mathematics which involves variables as numbers is known as algebra.

Not every book or mathematician will write the symbols for operations and variables in the same manner. Even in math, which is otherwise so rigid, algebra gives a room of individuality to each one of us. Here, are some of the conventions that will give you a better clarity on this: 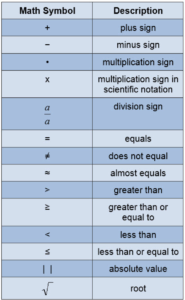 The major point of difference between arithmetic and algebra is the variable. Commonly, the variables are used in the formulas. For example, the formula for the area of rectangle = l * w

What is an Expression?

Building of The Algebraic Expressions 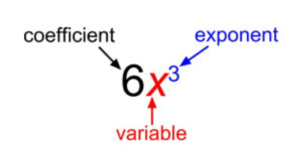 Q1.  Identify the variable, exponent, and coefficient in the given term of 3/5 k8

Ans: Here the variable is k, the exponent is 8 and coefficient is 3/5.

Q2. Identify the variable and constant in the expression 24 – x.

Ans: In the expression above, 24 is the constant and x is the variable since 24 is fixed and cannot change its value whereas x can be anything.