A Punnett square refers to a diagram whose main purpose is to determine the likelihood of each genotype of the offspring of two parents. Here, there is an application of the laws of probability. Students can explore more about the Punnett square here.

The various possible combinations of the gametes are in a tabular format. Furthermore, each box in the table is representative of one fertilization event. 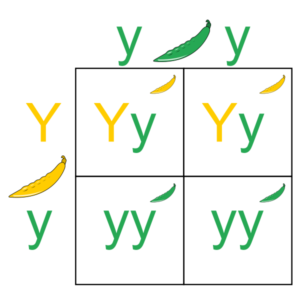 The determination of the inherent assumption of each trait is by a single gene locus, Furthermore, there is an independent assortment of various traits from one another. This certainly stands true for many useful traits.

There are two types of Punnett squares which are in common usage. The first one is relevant when observation of a single trait must take place.

Furthermore, this single trait is determined by one genetic locus. Most noteworthy, this is a monohybrid cross.

Good examples include some of Mendel’s original experiments. Furthermore, in these experiments, Mendell chose true-breeders for a single trait. Moreover, he crossed them with members which had a different allele.

A monohybrid cross is associated with 2X2 squares with four boxes. Also, each box represents one fertilization event between the parental gametes.

Here, a 4X4 square is necessary since each of the parents has the ability to produce four types of gametes. The basis of this is on the distribution of the alleles of the two genes.

Below is a good example of Punnett squares is the seed Color in Common Pea Plant- First of all, the famous pea plant under discussion here is Pisium sativum.

The creation of true-breeding homozygous plants for both the alleles was possible because of Mendell. These alleles are yellow and green colour seeds.

Above all, when Mendell cross-pollinated the homozygotes, he discovered that all the offspring had yellow seeds.

When the yellow offspring underwent self-pollination, green seeds were in almost 25 per cent of the second generation of pea plants.

So, the conclusion was that the yellow allele was dominant over the green one. For a better understanding of this concept, Mendel decided to come up with a test cross.

In a test cross, Mendell crossed some first-generation plants with the true-breeding green plant.

In every Punnett square, the representation of an allele is by the first letter of the phenotype which is dominant. Thus, in this case, the denotation of the dominant yellow colour allele is by the capital letter ‘Y’.

Furthermore, the denotation of the recessive allele is by the small letter ‘y’. Most noteworthy, each allele is allowed to segregate independently into a gamete and the representation of these gametes is just outside the 2X2 table.

Each of the boxes represents one possible genotype for the offspring. In this test cross, yellow seeds are present in half the offspring.

Furthermore, they are genotypically heterozygous. The other half is certainly homozygous and the green seeds are present there.

Q1 Which of the following statements is not true when it comes to Punnett square?

A. There are four types of Punnett squares which are in common usage
B. It refers to a diagram whose main purpose is to determine the likelihood of each genotype of the offspring of two parents
C. It refers to a graphical representation of an offspring’s possible genotypes
D. There is an application of the laws of probability in Punnett square