Did you know we can actually change the biological makeup of plants and crops to increase their yield and usefulness? In fact, most of the crops grown in India, such as wheat and rice,  have undergone plant breeding during the Green Revolution. Let us take a look.

Plant breeding is a method of altering the genetic pattern of plants to increase their value and utility for human welfare. It is a purposeful manipulation of plants to create desired plant types that are better suited for cultivation, give better yield and are disease resistant. Plant breeding is done for the following objectives –

The main steps of the plant breeding program are as follows-

Wild varieties species and relatives of the cultivated species having desired traits should be collected and preserved. The entire collection having all the diverse alleles for all genes in a given crop is called germplasm collection. Germplasm conservation can be done following ways-

2. Evaluation and Selection of Parents

The germplasm collected is evaluated to identify the plants with desirable characters. It is made sure that only the pure lines are selected. The selected plants are multiplied and used in the process of hybridization.

The Pollen Grain from one desired parent plant selected as a male parent is collected and dusted over another plant which is considered as the female parent.

4. Selection and Testing of Superior Recombinants

Progeny obtained after crossing are evaluated for the desired combination of characters.
These are self-pollinated for several generations till there is a state of uniformity so that the characters will not segregate further.

The selected plants are evaluated by growing the plants in an experimental field and the performance is recorded. This is done for at least 3 growing Seasons at different locations in the country. 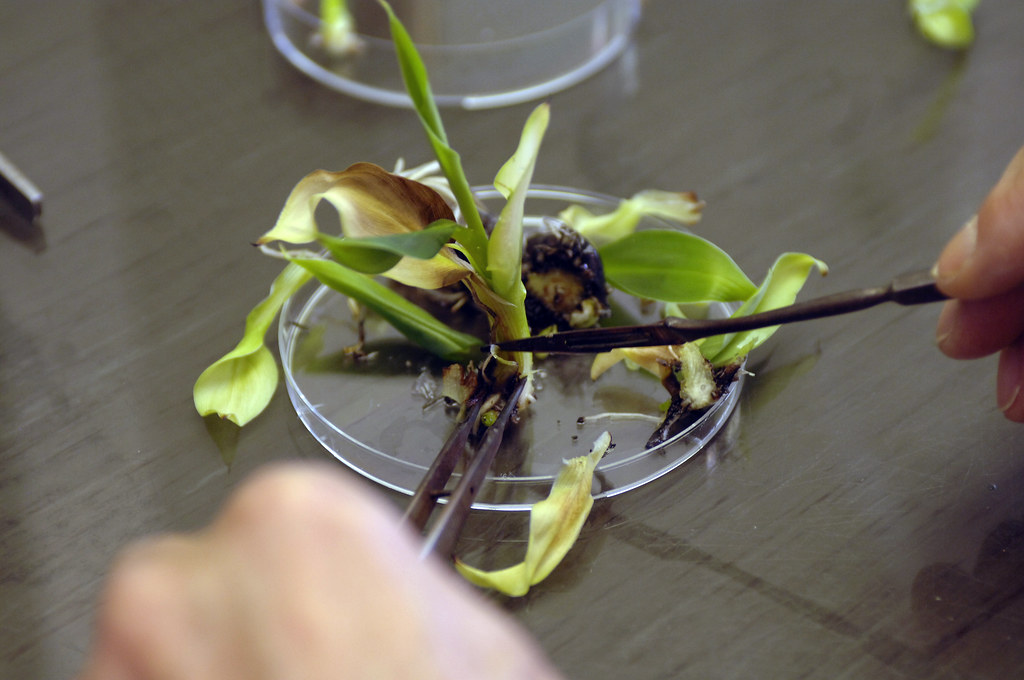 In the 1960s, wheat and rice production increased tremendously. Norman E. Borlaug developed semi-dwarf varieties of wheat. Sonalika and Kalyan Sona are two of the hybrid wheat varieties grown in India. Semi-dwarf wheat varieties were taken from IR−86 (International Rice Research Institute) and Taichung native−I (from Taiwan). Jaya and Ratna are the better-yielding, semi-dwarf rice varieties that were later introduced.

Some of the diseases caused by plants are-

The basic objective of breeding for disease resistance is to develop inherent quality in the plant to prevent the pathogen from causing the disease. Such varieties of plants are called resistant plants. The basic method is the same as normal hybridization. For hybridization resistant plant should be available for breeding.

Some diseases resistant plants developed are –

If resistant variety is not available, the resistance can be developed by inducing mutations in the plant through diverse means and then by screening the plant material for resistance.

Mutation is changed in the base sequence of the genes, induced by certain Chemicals or radiations. The resistant plants developed can be multiplied directly or can be used in other breeding experiments.

Plant Breeding for Developing a Resistance to Insect Pest

Resistance can be developed by following ways –

Some pest-resistant varieties are-

Biofortification is a method in which crops are bred for higher levels of vitamins, minerals, and fats. Due to this problem of malnutrition can be overcome. Following objectives were considered for the breeding program-

Some examples of biofortification-

Q1. In the area of plant breeding, it is important not only to preserve the seeds of the variety being cultivated but also to preserve all its wild relatives. Explain with a suitable example.

Ans. Preservation of the seeds of the cultivated variety and its wild varieties helps in making a good germplasm collection. Many high yielding and disease-resistant varieties of wheat, rice, and maize have been produced by selective breeding of plants. This could be possible because of a better germplasm collection.

Q2. Name a man-made cereal? Trace how it was developed and where is it used?

Ans. Triticale is the first man-made cereal. Triticale is a hybrid of wheat and rye. It was first bred in a laboratory in the late nineteenth century in Scotland and Sweden. It combines the yield potential and grain quality of wheat and resistance qualities of rye and mainly used as fodder.

Strategies for Enhancement in Food Production

Strategies for Enhancement in Food Production