There are three main methods for solving quadratic equations:

In addition to the three methods discussed here, we also have a graphical method. As you may have guessed, it involves plotting the given equation for various values of x. The intersection of the curves thus obtained with the real axis will give us the solutions. Let’s see the others in detail.

The first and simplest method of solving quadratic equations is the factorization method. Certain quadratic equations can be factorised. These factors, if done correctly will give two linear equations in x. Hence, from these equations, we get the value of x. Let’s see an example and we will get to know more about it. 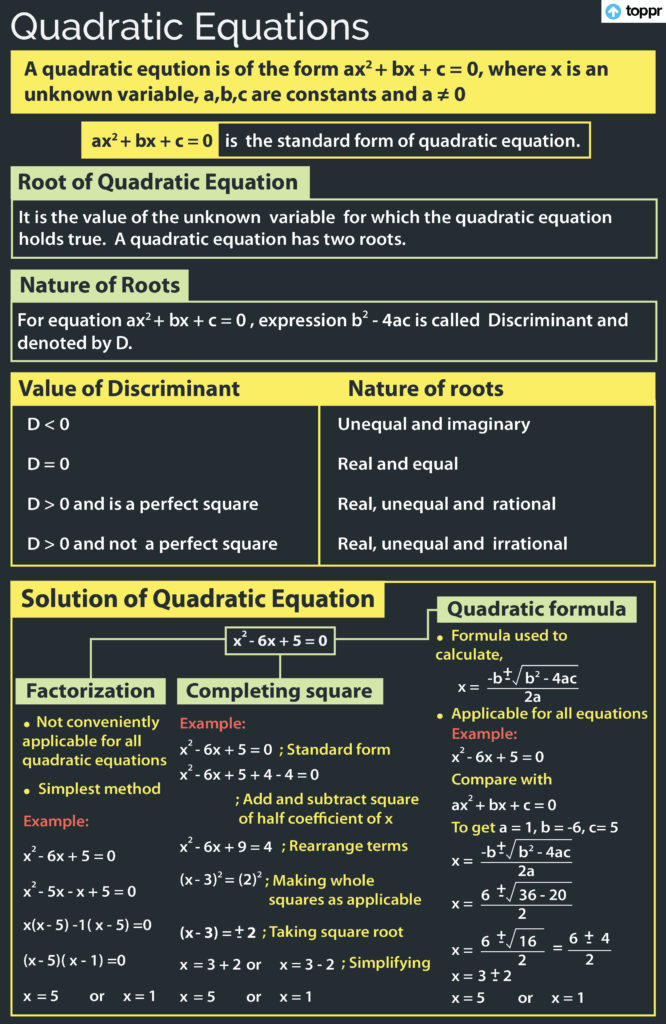 Each quadratic equation has a square term. If we could get two square terms on two sides of the quality sign, we will again get a linear equation. Let us see an example first.

This is known as the method of completing the squares.

There are equations that can’t be reduced using the above two methods. For such equations, a more powerful method is required. A method that will work for every quadratic equation. This is the general quadratic equation formula. We define it as follows: If ax2 + bx + c = 0 is a quadratic equation, then the value of x is given by the following formula:

Just plug in the values of a, b and c, and do the calculations. The quantity in the square root is called the discriminant or D. The below image illustrates the best use of a quadratic equation.

Question 5: What is the formula for solving quadratic equation?

Question 6: What is quadratic equation?

Question 7: Name of different method by which you can solve quadratic equation?

Question 8: What are the three form of quadratic function?

Answer: The three function are listed below which can be written as:

how do we state the nature of quadratics