This article discusses the Coulombs law formula and its derivation. Scientists in the 18th century knew that a particle that is electrically charged would exert a certain force on another charged particle. Despite understanding this, the scientists back then had no idea about the strength of the charge. Furthermore, the scientists were clueless about the various factors affecting the strength of the charge. This problem was finally solved by Charles Coulomb when he proposed the famous Coulomb’s Law. 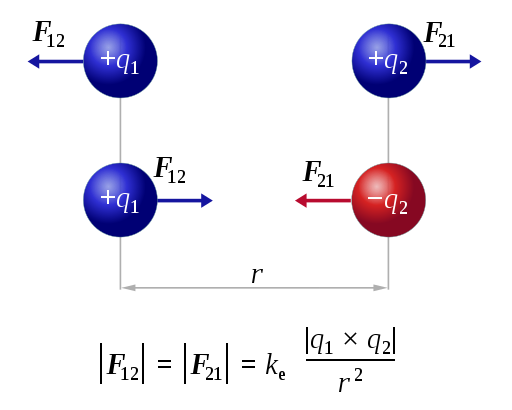 What is Coulomb’s Law

Coulomb’s Law provides one of the basic ideas about electricity in physics. This law takes a look at the forces which are created between two charged objects. As the distance increases then consequently there is a decrease in the forces and electric fields. The conversion of this simple idea took place into a relatively simple formula.

Coulomb’s Law states that the separation of the two point charge q1 and q2 is by the distance ‘r’.

Furthermore, F happens to be inversely proportional to the square of the distance between them
\(F \propto \frac{1}{r^{2}}\)

A1 The spheres certainly charges with the same sign. Therefore, the force between them is repulsive. Furthermore, the direction of the force on each sphere certainly points away from the other. In order to find the magnitude of the force, one must convert the charge on the particles to Coulombs. The prefix “µ”, meaning “micro”, gives an indication that the number is scaled by 10-6, and so 1 µC = 10-6 C. The charge of the first sphere would be:

The charge of the second sphere is:

One can find the magnitude of the electrostatic force on each sphere by making use of the Coulomb’s Law:

Hence the magnitude of the force on each sphere happens to be 3.595N.