What is Acceleration due to Gravity?

What is the Universal Gravitational?

In close distance to the surface of Earth, the acceleration due to gravity is approximately constant. But, at large distances from the Earth, or around other planets or moons, it is varying. The law of universal gravitation states that any two objects in the universe attract each other with a weaker kind of force. This force is directly proportional to the product of their masses, whereas inversely proportional to the square of the distance between them. 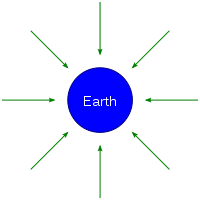 The Formula for Universal Gravitation:

Each object in this universe attracts the other objects. The gravitational force formula which is also known as Newton’s Law of Gravitation usually defines the magnitude of the force between the two objects.

In the above equation, \(M_{1} and M_{2}\) represent the masses of the objects involved. Here there is no difference in how big or small are the objects. Here r represents the distance between the objects.

G is the universal gravitation constant having fixed value as \(6.673 \times 10^{-11} Nm^{2}kg^{-2}\). Gravity is commonly misunderstood as a force that simply holds us on the Earth or it keeps planets in orbit. However, there are gravitational forces between all objects but normally we cannot feel it because Earth is having a very large mass and hence its gravitational force overshadows all of these other ones.

Also, the unit of the gravitational force is Newton (N). It is the general Physics law which is derived from the observations done by Isaac Newton. This law states that every point mass attracts another single point mass by the force pointing along the line intersecting both the endpoints.

Q.2: Calculate the gravitational force if the mass of two objects is 80 kg and 200 kg and they are placed at a distance of 6m.