In commonly used context drag force is the force that is exerted on a solid body moving with respect to a fluid due to the movement of the fluid. For example drag on a ship moving in water or drag on a plane moving in the air. Therefore a drag force is the resistance force caused by the motion of a body through a fluid like water or air. This drag force acts opposite to the direction of the oncoming flow velocity. Therefore, this is the relative velocity between the body and the fluid. In this article, we will discuss the concept and drag force formula with examples. Let us learn the concept! 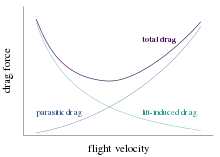 Drag force is the resistance force of a fluid. This force applies acting opposite towards the motion of the object which is moving submerge in a certain fluid. Thus Drag Force is defined as the force which resists the motion of a body with fluid.

Air resistance always limits the terminal speed which a falling body can reach. Here air resistance is an example of the drag force, which is the force that objects feel when they move through a fluid.

Similar to kinetic friction, drag force is of reactive nature because it only exists when the object is moving and it points in the opposite direction to the motion of the object through the fluid.

This force can be broken into two types such as form drag and skin drag. Form drag is caused by the resistance of the fluids to being pushed out of the way by an object in motion through the fluid.

Therefore, form drag is similar to the normal force provided by the resistance of solids to being deformed. Skin drag is essentially a kinetic frictional force caused by the sliding of the fluid along the surface of the moving object.

Its value is directly dependent on Fluid density, Square of the velocity, Drag coefficient, and Cross-section area.

The formula for Drag Force

Q.1: A vehicle travels with a speed of 80 km per h, with a drag coefficient of 0.25. If the cross-sectional area is 6 square meters, then find out the drag force.

The drag force formula is: