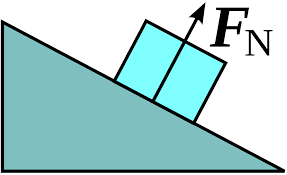 The normal force is thoroughly defined as the force component vertical to any contact surface. It also decides the amount of force which the body applies on the ground.

The normal force will be equivalent to the weight of the object only if the object is not accelerating i.e. decelerating. When an object is about to fall, then it will depend on which position the object falls on the ground. It is denoted by \(F_N\) and is given in newton (N).

The formula for normal force:

Q.1: The body drops down with a force of 300 N. If the mass of the object is 20 kg at an angle of 30\degree. Then compute the normal force being applied to the body.

The normal force formula is articulated as,

Thus, the normal force is applied to the body is 246 N.

Q.2: A book of mass 2 kg is lying on the floor. Calculate the normal force being applied to the book.

The normal force is computed as,

Substituting the values, we get