Albert Einstein gave the theory of relativity. This theory was based on the laws of physics are the same for all non-accelerating observers. Also, it says that the speed of light in a vacuum was independent of the motion of all observers. Through this, it is possible to have a new framework for all physics and also it is proposing new concepts of space and time. This theory upended centuries of science and gave physicists a new understanding of space and time. This article will explain this theory of relativity with relativity formula and examples. Let us learn it!

What is the Theory of Relativity?

According to Isaac Newton’s theory of space and time, both are fixed. But, in the new picture provided by special relativity and general relativity theories. Einstein’s theory was proposed in 1905. It describes the relativity of motion, particularly the motion of anything moving with the speed of light.

Initially, people believed that light is a type of waves similar to sound waves, ocean waves or shock waves. So, it needs a medium to travel. But rather than air, water or ground, they believed that light waves may travel through the ether, which is less tangible than air that pervaded the universe. 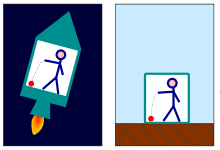 The formula that relates a value in one reference frame to the value in another is labelled with the symbol gamma  \(\gamma\). It is a unitless term and depends on the velocity divided by the light speed. The value \(\gamma\) is known as the relativistic factor.

According to the theory of relativity, the formula is:

Where \(\gamma\) is gamma a unitless quantity, and it is popular as a relativistic factor.

Q.1: An electron has a velocity of 0.990 × c. Calculate the relativistic factor \(\gamma\) using Relativity Formula.

Solution: Given parameters are as follows,

Therefore the relativistic factor will be 7.0888.

Q.2: Are the concepts from the general relativity useful in other fields like biology?

Solution: General relativity is the theory by Einstein. According to it, the answer is No, the concepts from general relativity are not currently very useful in the field of biology. It is because for general relativity to really show its effect, this gravitational field must be fairly strong and has a very large massive body something like a whole planet, and also its effects are fairly minimal.

Q.3: Find out the expression for the variation of mass of a particle with velocity.

Solution: Basically when a particle moves towards the speed of light, its mass gets large and it can’t go any quicker in comparison to the speed of light. This enormous speed limit has been a subject of a lot of discourse in material science, as individuals consider how to traverse tremendous separations. This required expression is:

Where \(M_{t}\) is the transverse mass and M is the original mass.