What is Tangential Velocity?

A tangent is simply a line that touches a non-linear curve (like a circle) at only a single point. It represents an equation with the relationship between the coordinates “x” and “y” on a two-dimensional graph. 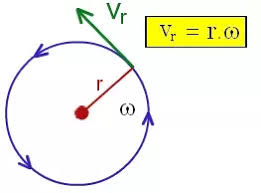 The Formula for Tangential Velocity

First, we have to calculate the angular displacement \(\theta\), which is the ratio of the length of the arc ‘s’ that an object traces on this circle to its radius ‘r’. We measure it in radians.

Q.1: If the angular velocity of a wheel is 40 \frac{rad}{s}, and the wheel diameter is 60 cm. Determine the tangential velocity of the wheel.

Tangential velocity formula is as given:

Thus tangential velocity will be 12 meters per sec.

Q.2: If a wheel is turning with a speed of 12 m per sec, and its angular velocity is 6 radians per sec. Then find out its radius.

Solution: The tangential velocity is as follows,

Now the formula for tangential velocity is:

Therefore, the radius is 2 meters.