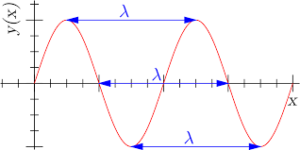 The wavelength of any sinusoidal wave can be defined as the spatial period of the wave. This is the distance over the shape of the wave repeats itself. We calculate the wavelength in the units of length or meter.

The symbolic representation of this formula and the formula is as follows:

Q.1: In an experiment in physics, the wavelength of a photon particle was observed to be 500 nm. What will be the frequency of the wave?

Solution: As given here, the wavelength of the photon particle = 500 nm.

In order to calculate the frequency of the photon particle, we will use the formulas:

Q.2: For a light ray which have the wavelength equal to 200 nm, calculate the frequency of the ray.

Solution: As given, in the problem,

Substituting these values in the equation above, we get that,