Have you ever observed that whenever you put a straw in your cold-drink, it looks bent? Or while travelling on a road on a hot summer day, distantly, water appears in the middle of the road out of no-where! Do you know how this happens? Does the straw really bend when immersed in water? Or is it just our eyes? Scroll ahead to know more about refraction and refractive index.

The change in direction or bending of a light wave passing from one transparent medium to another; caused by the change in wave’s speed is known as “Refraction”.

An example to understand this better is that of placing a straw/stick in a glass of water wherein it to be bent when viewed from any other angle than 900 to the surface. This happens because of bending of light rays as they move from air to glass. This bending of light depends on the speed of light in air and glass and the speed is dependent on the wavelength.

The extent of bending of light rays entering from one medium to another is known as “Refractive Index”. It is denoted by the letter ‘n’.  And can be represented as :

Where c = velocity/speed of light of a certain wavelength in the air and v = velocity of light in any medium.

The refractive index depends on the following factors:

a. nature of the medium

c. the color of the wavelength of light

The nature of a medium is defined as:

a. A medium is said to be “optically rarer” medium if the light in it travels faster.

b. A medium is said to be “optically denser” medium if the light in it travels slower.

a. Optically denser medium to optically rarer medium it bends away from the normal.

b. Optically rarer medium to optically denser medium it bends towards the normal. 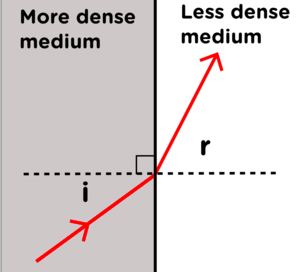 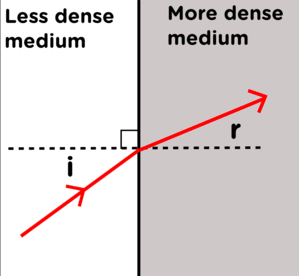 This gives rise to the second law of refraction also known as the “Snell’s Law”.

It gives the amount of bending of light rays. It determines the relationship between the angle of incidence, the angle of refraction and relative indices of given pair of media. It is defined as the : 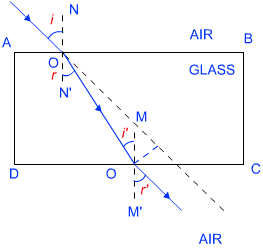 Laws of refraction state that:

i. The incident ray, reflected ray and the normal, to the interface of any two given mediums; all lie in the same plane.

Q1. For the same angle of incidence in the mediums A, X and Y, the angles of refraction are 550, 350, 150 respectively. In which of the medium will the velocity of light be minimum?

For the given angle of incidence (i), V will be minimum, when angle of refraction <r is minimum

From the given data in medium Y, the velocity of light will be minimum.