One can observe single slit diffraction when the passing of light takes place via a single slit whose width (w) is on the order of the light’s wavelength. Furthermore, the diffraction pattern on the screen takes place at a distance L >> w away from the slit. Moreover, intensity happens to be a function of angle.

Experts define diffraction of light as the bending of light around corners such that it spreads out and illuminates areas where one can expect a shadow to form. In general, it is difficult to separate diffraction from interference because the occurrence of both takes place simultaneously. Furthermore, the reason for the silver lining which we witness in the sky is because of the diffraction of light.

In the single-slit diffraction, one can observe the phenomenon of bending of light or diffraction. Moreover, this phenomenon causes light from a coherent source to interfere with itself, thereby resulting in the production of a distinctive pattern on the screen called the diffraction pattern. Furthermore, diffraction is evident when the sources are of very small size, such that they are relatively of the size of the wavelength of light. 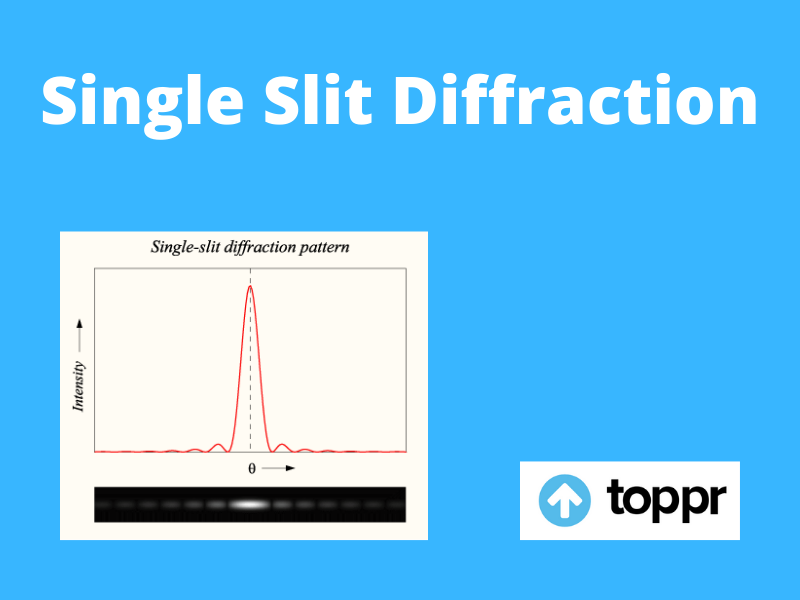 Consider that the slit width a << D. x`D is the separation between slit and source. Now, one can identify the angular position of any point on the screen by ϑ whose measurement takes place from the slit centre which divides the slit by a/2 lengths.

In order to describe the pattern, one must first look at the condition for dark fringes. Also, the division of the slit can take place into zones of equal widths a/2. Furthermore, consider a pair of rays whose emanation takes place from distances  a/2 from each other.

The path difference exhibited by the top two rays is:

An important point to remember is that this calculation is valid only if D is very large. Furthermore, it is possible to consider any number of ray pairings that start from a distance a/2 from one another. Moreover, one can consider any arbitrary pair of rays at a distance a/2.

For the first fringe,

For a ray emanating from any point in the slit, there exists another ray at a distance a/2 from which destructive interference can take place.

For the next fringe, division of the slit can take place into 4 equal parts of a/4 and the same logic can be applied. Therefore, for the second minima:

Similarly, for the nth fringe, division of the slit can take place into 2n parts and this condition can be used as:

The maxima lies between the minima and the width of the central maximum. Furthermore, it simply refers to the distance between the first order minima from the centre of the screen existing on both sides of the centre.

The position of the minima expressed by y (whose measurement takes place from the centre of the screen) is:

Question 1: What is meant by diffraction maxima and minima?

Question 2: What is meant by single-slit diffraction?

Answer 2: In the single-slit diffraction, observance can be made of the phenomenon of bending of light or diffraction. Moreover, this phenomenon causes light from a coherent source to interfere with itself, which in results in creating a distinctive pattern on the screen called the diffraction pattern.