Suppose you are driving a car and you overtake the other car from behind. What actually happens is that the driver from the car behind you sees the car coming in the backward direction and eventually goes back. But the person standing on the ground doesn’t see it as the car is moving backwards, although the driver behind sees it that way. This is what relative velocity is. Let us study more about it below.

When you are traveling in a car or bus or train, you see the trees, buildings and many other things outside going backwards. But are they really going backwards? No, you know it pretty well that it’s your vehicle that is moving while the trees are stationary on the ground. But then why do the trees appear to be moving backwards? Also the co-passengers with you who are moving appear stationary to you despite moving.

This is the only formula that describes the concept of relative velocity. When two objects are moving in the same direction, then

When two objects are moving in the opposite direction, then

Lets us understand the concept of relative velocity with this example. 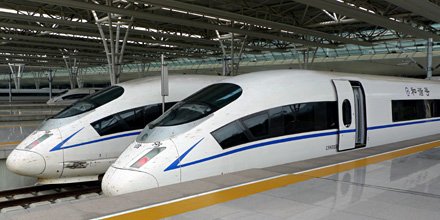 Consider two trains moving with same speed and in the same direction. Even if both the trains are in motion with respect to buildings, trees along the two sides of the track, yet to the observer of the train, the other train does not seem to be moving at all. the velocity of the other train appears to be zero.

Q1. Two trains each traveling at a speed of 20kmph  approach each other on the same straight track. A bird that can fly at a speed of 40kmph flies off from one train when they are 40km apart and heads directly for the other train. On reaching the other train it flies directly back to the first train and so forth. Before the trains crash, the total distance traveled by the bird is

Q2. Captain Ravi, of a plane, wishes to proceed due west. The cruising speed of the plane is  251 m/s relative to the air. A weather report indicates that a 65 m/s wind is blowing from the south to the north. In what direction, measured to due west, should Ravi, head the plane relative to the air?