When you open your window in a room, the light enters through the window and spreads throughout the room. Do you why does this happen? This is because light has got some wave nature, that spreads in the room in all the directions. To understand this in a better way let us study the Huygen’s Principle.

It states that each point of the wavefront is the source of the secondary wavelets which spread out in all direction with the speed of a wave. So if we consider a point source, it will emit its wavefront and nature of the wavefront will be spherical one. 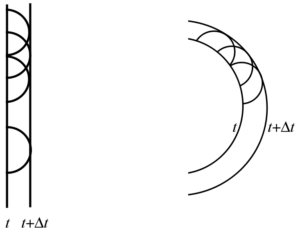 This means that, suppose you are standing on the mountain and you throw a stone in the water from a height. What do you observe? You see that the stone strikes the surface of the water and waves are seen surrounding that point. Every point on the surface of water starts oscillating.

Q1. Ray optics is valid when characteristic dimensions are:

Answer: C. Ray optics is valid when characteristic dimensions are much larger than the wavelength of light so that the rectilinear property of light can be used.

Q2. According to Huygen’s Principle, the ether medium pervading entire universe is:

Ans: B. Huygen considered light needs a medium to propagate called either as highly elastic and less dense.

Ans: B. Huygens’s concept of secondary wave is a geometrical method to find the wavelength. 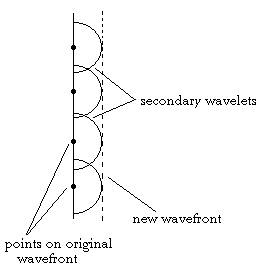 Huygen’s principle states that every point on the wavefront may be considered a source of secondary spherical wavelets which spread out in the forward direction at the speed of light. The new wavefront is the tangential surface to all these secondary wavelets. Thus, it is a geometrical method to find the wavelength.