Company forms of businesses have become immensely popular over the years. Their development has led to the creation of so many new types of companies. Companies are to be classified on the basis of liabilities, members and on the basis of control.

We can classify all these companies in various categories.

Classification of Different Types of Companies 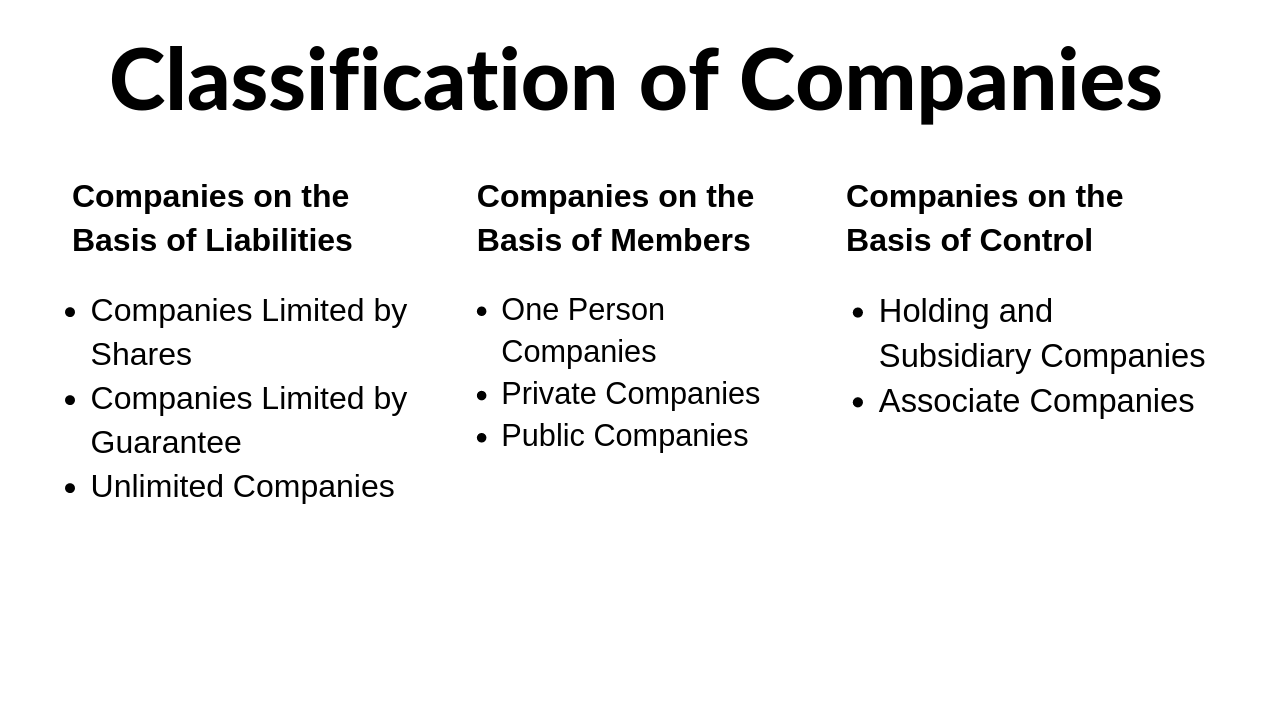 Companies on the Basis of Liabilities

When we look at the liabilities of members, companies can be limited by shares, limited by guarantee or simply unlimited.

a) Companies Limited by Shares

Sometimes, shareholders of some companies might not pay the entire value of their shares in one go. In these companies, the liabilities of members is limited to the extent of the amount not paid by them on their shares.

This means that in case of winding up, members will be liable only until they pay the remaining amount of their shares.

b) Companies Limited by Guarantee

In some companies, the memorandum of association mentions amounts of money that some members guarantee to pay.

In case of winding up, they will be liable only to pay only the amount so guaranteed. The company or its creditors cannot compel them to pay any more money.

Unlimited companies have no limits on their members’ liabilities. Hence, the company can use all personal assets of shareholders to meet its debts while winding up. Their liabilities will extend to the company’s entire debt.

Companies on the basis of members

a) One Person Companies (OPC)

These kinds of companies have only one member as their sole shareholder. They are separate from sole proprietorships because OPCs are legal entities distinct from their sole members. Unlike other companies, OPCs don’t need to have any minimum share capital.

Private companies are those whose articles of association restrict free transferability of shares. In terms of members, private companies need to have a minimum of 2 and a maximum of 200. These members include present and former employees who also hold shares.

In contrast to private companies, public companies allow their members to freely transfer their shares to others. Secondly, they need to have a minimum of 7 members, but the maximum number of members they can have is unlimited.

Companies on the basis of Control or Holding

In terms of control, there are two types of companies.

a) Holding and Subsidiary Companies

When we consider the access a company has to capital, companies may be either listed or unlisted.

Unlisted companies, on the other hand, do not list their securities on stock exchanges. Both, public, as well as private companies, can come under this category.

Other Types of Companies

Foreign companies are incorporated outside India. They also conduct business in India using a place of business either by themselves or with some other company.

Certain companies have charitable purposes as their objectives. These companies are called Section 8 companies because they are registered under Section 8 of Companies Act, 2013.

Charitable companies have the promotion of arts, science, culture, religion, education, sports, trade, commerce, etc. as their objectives. Since they do not earn profits, they also do not pay any dividend to their members.

These companies are generally formed for future projects. They do not have significant accounting transactions and do not have to carry out all compliances of regular companies.

A Nidhi company functions to promote the habits of thrift and saving amongst its members. It receives deposits from members and uses them for their own benefits.

Life Insurance Corporation, Unit Trust of India and other such companies are treated as public financial institutions. They are essentially government companies that conduct functions of public financing.

Solved example of Types of Companies

Question: Consider these features and state what types of companies they are attributable to.

i) Shares are freely transferable

ii) Only one member exists

iv) Shares are not listed on stock exchanges

vi) 35% shares held by another company

iv) Private or even public companies