What is while loop in Python? Python consists of two types of loops, namely for loop and while loop. A while loop is categorized as a kind of indefinite iteration. This basically means that in a python while loop, we cannot predict the number of times it will be executed. It can sometimes even be thought of as a reiterating if statement. Let us discuss the while loop in detail.

Table of content
1 Syntax:
2 How do you use a while loop in Python?
2.1 Example:
2.2 Output:
3 How does a Python While loop work?
4 Loop Control Statements
4.1 Continue Statement
5 While loop with else
6 FAQs on Python while loop

In this, the first step is to check the test expression.

Statement(s) within the loop includes all those statements which are indented by the same number of spaces on the left. These statements are collectively referred to as a single code block. Python employs indentation for the grouping of statements and the end of a block of code is determined by the first unindented line. By default, any non-zero value is determined as true whereas None and 0 are interpreted as

How do you use a while loop in Python?

When the above program is run, the result obtained is as follows:

In the written program, the code will be executed(or the test expression will be

The counter variable is incremented by one after each iteration and the statement for the same has been defined in the body of the while loop. This is a crucial step, yet most of the students and learners tend to miss this step and then end up with infinite loops (loops that do not terminate on their own).

How does a Python While loop work? 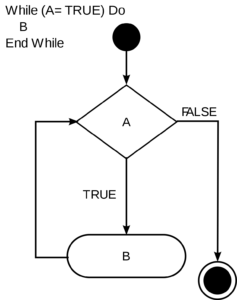 In this program, we first defined a list of random numbers and then we started the counter variable. The while loop is executed either as long as the number of iterations is equal to or less than 4 or if the  5th element in the list is reached. In the case of the latter, break statement is used to terminate the loop when the value of the variable

Copy Code Copied Use a different Browser
is 3.

With the help of the continue statement, the control is returned to the beginning of the loop. Let us see this with an example.

The result obtained on execution of the above program is:

On successful execution of the program, all the letters except ‘i’ and ‘s’ are returned to the screen as output. Each iteration takes the entire word ‘mississippi’ into account and prints the first letter after eliminating ‘i’ and ‘s’. Hence, the first letter that is printed is m and then p is printed twice since it occurs twice in the selected word.

When there is a need for creating empty loops, we make use of the pass statement. Pass statement is also used in empty control statements, functions and classes. Again, let us see this with an example.

The result obtained on execution of the above program is:

In the above program, we need to crate an empty loop in which we store all the values of the string ‘Hello World’. Next, a counter variable

Copy Code Copied Use a different Browser
is started. For this, we use the len() function for calculating the number of letters in the current string. While loop is defined such that it displays the precise number of letters in the string. The counter variable is incremented by one for each iteration as long as all the letter in the string is taken into account while executing the program.

While loop with else

Similar to for loops, while loops also have an optional else block. This else block is executed only when the test condition/expression results in

As discussed above, we can make use of a break statement to terminate a while loop. The else block is ignored in such cases. Therefore, the else block of a while loop runs if the program is executed without any breaks and the condition/expression is false. In other words, we have already learnt that the line immediately after the loop is executed in case the condition becomes false which is precisely the case here.

FAQs on Python while loop

Q. Is there a while loop in Python?

A. Yes, there are two kinds of loops in Python- for loop and while loop.

Q. How do you write a while loop in Python?

A. The syntax for a while loop is as follows:

Q. How does while loop work in Python?

Q. How do you use a while loop?