Depreciation is a simple and interesting concept to study in accountancy. It holds the vital answer to the amount of expense which is charged to the profit and loss account during a period. The amount of depreciation, like other expenses, impacts the amount of profit earned or loss incurred during a year. Therefore, it is important to study the different methods, such as SLM, annuity method etc. Let us study these methods.

The Methods of Charging Depreciation 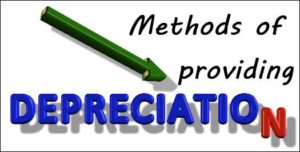 The units of production depreciation method allocate an equal amount of expense to each unit produced or service rendered by the asset. This method is usually applied to assets used in the production line. The formula to calculate depreciation expense involves the following steps:

Determine the depreciation per unit:

Determine the expense for the accounting period:

(Depreciation per unit X number of units produced in the period)

Sum of years’ digits is a depreciation method that results in a more accelerated write off of the asset than the straight-line method, but less accelerated than that of the double-declining balance method. Under this method, annual depreciation is determined by multiplying the depreciable cost by a series of fractions based on the sum of the asset’s useful life digits. The sum of the digits can be determined by using the formula:

The double-declining balance method is a type of accelerated depreciation method that calculates a higher depreciation charge in the first year of an asset’s life and gradually decreases depreciation expense in subsequent years. This method is used if the organization wants to increase the expenses for the year, to reduce tax liability.

Annuity depreciation methods are usually not based on time, but on a level of Annuity. This could be miles driven for a vehicle, or a cycle count for a machine. When the asset is acquired, its life is estimated in terms of the level of activity or annuity. Assume a vehicle above is estimated to go 50,000 miles in its lifetime. The per-mile depreciation rate is calculated as follows:

Each year, the depreciation expense is then calculated by multiplying the number of miles driven by the per mile depreciation rate.

Share with friends
Previous
Methods of Recording Depreciation
Next
Depreciation, Provision and Reserves

can we take certain/uncertain income in provision

Uncertain amount will be taken in provision. present obligation arising past event and second condition 50% probability and third amount will be perfect observation not randomly.

We have made provision for Bad Debts by debiting P&L during the year 2016-17. The debtors balance is still debit in our Books. How to make write off entry?