What is amazing about our planet Earth is the huge diversity that it houses! Look around and you can find diverse forms of organisms, each one different than the others. This is just a minuscule way to look at it. Imagine the earth as a whole! Isn’t that fascinating? Let us look at this diverse biological aspect of our planet and learn more about conservation of biodiversity.

Going by the raw definition, biodiversity is the totality of genes, species, and ecosystems of a given region. Edward Wilson coined this term for the first time. Conservation of biodiversity can be studied in different segments. They are:

Let us look at these forms of diversity in brief.

Organisms of a single species that have greater genetic diversity tend to have more sustenance against environmental disturbances. Genetically uniform species are usually prone to disease harsh environments.

The diversity of species is further classified into:

Ecological Diversity is very related to the species diversity. In our country, you can find more ecosystem diversity compared to other countries. We have several biomes like alpine meadows, rainforests, deserts, wetlands, and mangroves etc.

It is amazing to know that the total number of plant and animal species on this planet is about 1.5 million. This data is according to to the IUCN(2004). More than 70% of the species recorded are animals and plants account for about 22%; 70% of the animals are insects. However, one drawback of these estimates is that they do reveal any data for prokaryotes. This is because:

Let us more specifically discuss the conservation of biodiversity in India.

India is one of the twelve mega biodiversity countries of the world. It has only 2.4 % of the land area in the world. However, it has 8.1 % of the global species diversity. As an estimate, there are around 45,000 species of plants and about 90,000-1,00,000 species of animals. There are still quite a number of species that are yet to be discovered. 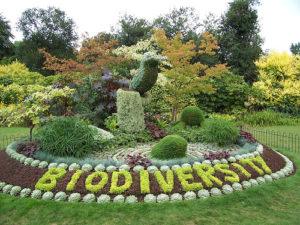 Biodiversity varies with latitude and altitude of the place. If the environmental conditions are favorable for the speciation, you will find more diversity in such areas.

Biodiversity depends upon the latitudinal gradients of a place. They are decreased from the equator towards the poles. For example, Colombia (near the equator) has 1400 species of birds whereas New York(41° N) has 105 species. Why is species diversity important to the ecosystem? According to ecologists, communities with more species tend to be more stable than those with fewer species.

What Do We Mean By a Stable Community?

A stable community does not show too much of variations in the year-to-year productivity. It is either resistant or resilient to seasonal disturbances. Therefore, it is important for us to realize that species richness and diversity are essential for ecosystem health. They are indispensable for the survival of human race on earth.

Today the earth is facing a loss of biodiversity at rapid rates. It is mainly caused by industrialization, population, and urbanization. Today, 31% gymnosperms,32%amphibians,12% bird species and 23% of mammals face the threat of loss of biodiversity.

Adverse Impacts of Loss of Biodiversity

Causes of Loss of Biodiversity

Importance of Conservation of Biodiversity

Humans derive a number of economic benefits from nature like food, firewood, fibres, medicines and more.  More than 25% of the drugs are derived from plants and more than 25,000 species of plants are used by natives for medicine.

Besides this, biodiversity plays an important role in maintaining and sustaining the supply of goods and services. It is also important to preserve every species of plants and animals as each one has some or the other role to play in our nature.

Q. Give some examples of extinct species from all around the world, with their location.

Ans: Some examples of extinct species from all around the world, with their location are:

Share with friends
Previous
Management of Natural Resources
Next
Factorisation