Have you ever seen a globe? We all enjoy rotating the globe round and round again. But, that is not the purpose of it! Talking on serious terms, a globe gives us an idea about the shape of the earth. Before we proceed any further, what do you think the shape of earth is like? Is it round like the globe? Let us know about it in further detail.

Table of content
1 Suggested Videos
2 Shape of Earth
2.1 When Was the Earth Formed?
2.2 Browse more Topics under Sunita In Space
2.3 Why Is The Earth Round In Shape?
2.4 Do the People in Argentina Stand Upside Down, If the Earth is Round?
3 Question For You

Do you ever wonder what exactly the shape of earth? What you think the earth looks like? If you think it looks like the globe, you are not exactly right! Long ago, people thought that it was flat like a coin. But later on, when pictures were taken from space then we got to know that the earth is actually not perfectly spherical but it is very close to that of the shape of a sphere. 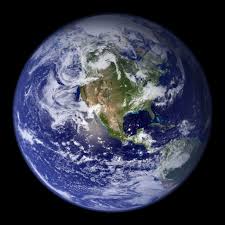 When Was the Earth Formed?

About 4.7 million years ago, the earth was formed. It is a small celestial object. On its axis, the earth rotates about an imaginary straight line through its centre.

Why Is The Earth Round In Shape?

For this answer, first of all, we should know about two things that are mass and gravity. In the universe, every single thing has mass. If something is more big and dense, then more mass it has. Then another interesting thing which we are not able to see is that all the objects with mass are being pulled towards each other because of a force called gravity. So for this, if we drop something then it falls towards the Earth not up into the sky.

Do the People in Argentina Stand Upside Down, If the Earth is Round?

No! There is nothing like that! They are also standing upright. No “up” and “down” is there on the earth. It is relative. Let us take an example to understand. Take a 5rs coin and a small piece of paper. Fold the paper to one-fifth the size of the coin. Then, hold the coin in one hand and paper in another hand. At the same time drop them. What happens? Both of them fall down, but the coin falls more quickly! This all happens because of the gravitational force.

Q1. If the Earth is round like a Globe then how it is possible that we don’t fall off?

Ans: Due to the gravitational force of the earth, it attracts everything towards itself. That is the reason why we don’t fall off. This is also the reason why things stay in their own places. This is something that space lacks. Therefore, everything keeps floating in space.