Any disorder or malfunctioning of the body or mind that destroys good health can be called as a disease. The status of health of the body in a disease is said to be compromised. A disease can be caused due to a variety of reasons. Every disease has characteristic symptoms through which we can identify the types of diseases.

Depending on certain characteristics, diseases can also be classified as an acute disease where the onset of the disease is sudden, lasts for a short time, with rapid changes; and chronic diseases where the effects of the disease can last for months or years. 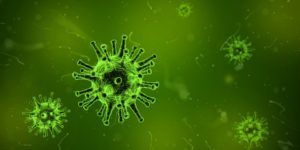 Any organism or microorganism that causes a disease is called as a pathogen. A specific disease is caused by a specific pathogen. The infectious diseases are often transmitted by pathogens. These diseases can be spread through contact or proximity, either through air, water, soil or through vectors.

Pathogens can be of different types. They can be either bacteria or virus or fungi or a protozoan or even a helminth. Most of the parasites that are found are pathogens as they cause many diseases in humans.

Some of the bacterial diseases are Syphilis, Pneumonia, Tetanus, and Tuberculosis. Examples of diseases caused by a virus are Chickenpox, Small Pox, Measles, Polio. Fungal infections include Ringworm infection, Athlete’s foot, Yeast infections etc. Malaria is a disease caused by an organism belonging to Protista. Diseases caused by helminths include Ascariasis, Taeniasis etc. 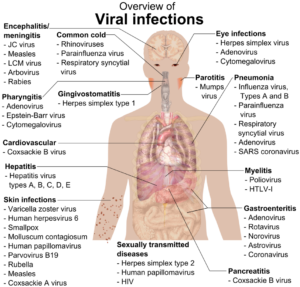 Some Types of Diseases Explained Briefly

It is caused by the bacterium, Salmonella typhi. The pathogen enters the body through contaminated food and water. High fever, weakness, stomach pain, headache, constipation, loss of appetite are the symptoms of this disease. The Widal test confirms this disease.

It is caused by Streptococcus pneumoniae and Haemophilus influenzae bacteria. This disease affects the lungs. The alveoli of the lungs get infected and filled with fluid, causing respiratory problems. This is a disease that is acquired by inhaling the droplets or aerosols that are released by an infected person. The main symptoms include chills, fever, headache, and cough.

The common cold is generally caused by a group of viruses called rhinovirus. The respiratory passage and the nose are commonly infected here. Nasal congestion, discharge, sore throat, cough, hoarseness, tiredness, are some of the associated symptoms of common cold, that can last for up to seven days.

This infection is transmitted when an infected person releases the droplets either through a cough or sneeze. These droplets can be either inhaled directly by other people or can be transmitted with the help of contaminated objects.

How does MRI Scanner Work?

The female Anopheles mosquito is the vector that carries the infectious form of the pathogen into the human body. Therefore, the malarial parasite has two hosts, i.e. human and mosquito to complete its life cycle.

When an infected female Anopheles mosquito bites a human, it transfers the sporozoites of the Plasmodium parasite. These parasites multiply in the liver cells and then attack the RBCs, rupturing them. When RBCs rupture, they release a toxic substance called haemozoin. This toxic substance is responsible for the classic symptoms of malaria – fever associated with chills. The spread of the disease can be controlled by killing the vector, mosquito. 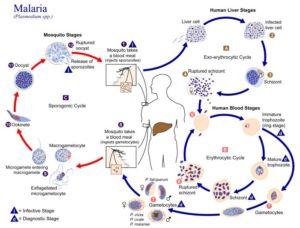 Entamoeba histolytica causes Amoebiasis. It is a protozoan parasite that is present in the large intestine of a human. Amoebiasis is also called as amoebic dysentery. This disease is transmitted by houseflies that carry the parasite from the contaminated faeces of an infected person to any food product, thereby contaminating it.  The symptoms include abdominal pain, cramps, constipation, stools with excess mucous etc.

It is a disease that is caused by a helminth, Ascaris lumbricodes, also called the roundworm. It is an intestinal endoparasite found in humans. Muscular pain, internal bleeding, fever, anaemia, intestinal passage blockage are some symptoms of this disease. The infection is spread by contamination of soil, water, plants, etc. as the eggs of the parasite are excreted out through the faecal matter.

Also called as elephantiasis, this disease is characterized by the inflammation of the affected organs. Even genital organs can get affected by this disease. Wuchereria bancrofti and Wucheria malayi are the filarial worms that are responsible for causing this disease.  The female Culex mosquito acts as the vector for transmitting the pathogen.

Ringworm infection is caused by Fungi. Some of the Fungi that cause this infection are Microsporum, Trichophyton, and Epidermophyton. It is a very common infectious disease that is characterized by intense itching and dry, scaly lesions on the skin, nails, and scalp. Moisture and heat are the favourable factors that help the fungi grow.

The different types of diseases, especially, infectious diseases can be prevented by taking the right measures. Personal and public hygiene play an important role here. Eradication of vectors that carry the pathogens is also an effective preventive measure. Vaccinations also help in tackling many infectious diseases.

Mental Health and the factors that affect it.

Q: Blackwater fever is also known as which of the following?

Ans: The correct option is “C”. Blackwater fever, also called malarial hemoglobinuria or ‘aestevo autumnal malaria’ is a complication of malaria in which the RBCs burst in the bloodstream, (hemolysis) releasing haemoglobin directly into the blood vessels and into the urine, leading to kidney failure.

Share with friends
Previous
Health and Diseases
Next
Vaccines and Immunization