In view of the coronavirus pandemic, we are making LIVE CLASSES and VIDEO CLASSES completely FREE to prevent interruption in studies
Biology > Biotechnology: Principles and Processes > Tools of Biotechnology

The field of biotechnology has evolved tremendously over the years. It has gone from the traditional view of using microbes to generating products for human use, to the modern view of using genes for developing vaccines. Therefore, the European Federation of Biotechnology (EFB) has come up with a new definition that involves both the traditional and the modern view of biotechnology. It states that –

‘Biotechnology is the integration of natural science and organisms, cells, parts thereof, and molecular analogs for products and services’. The two core techniques responsible for the birth of modern biotechnology are:

Traditional hybridization methods in plant and animal breeding introduce desirable as well as undesirable genes. The techniques of genetic engineering such as recombinant DNA technology, gene cloning etc. overcome this problem, allowing us to introduce only desired genes. Genetically modifying an organism has the following basic steps:

Let us now learn about the tools of biotechnology.

Restriction enzymes, also known as ‘restriction endonucleases’ are molecular scissors that can cut DNA at specific locations. These are part of a larger class of enzymes called ‘Nucleases’. Nucleases are of two kinds:

‘Hind II‘ – the first restriction endonuclease to be isolated, identifies a specific six base pair sequence and always cuts the DNA at a particular point. This specific sequence is the ‘Recognition sequence‘. Today, there are more than 900 restriction enzymes, isolated from about 230 bacterial strains. Each of these enzymes recognizes different recognition sequences. There is a naming convention to name restriction enzymes. Let’s learn this using EcoRI as an example:

Mode of Action of Restriction Enzymes

Endonucleases perform their function in the following manner:

On reading both the strands shown above in the 5′ to 3′ direction, they give the same sequence. This is true even when they are both read in the 3′ to 5′ direction.

Restriction enzymes cut the DNA strand a little away from the center of the palindromic site, but between the same two bases on both strands. This gives rise to single-stranded, overhanging stretches on each strand called ‘sticky ends’. They are called ‘sticky’ because they can bind to their complementary cut counterparts. 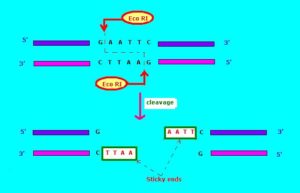 Just the way a mosquito acts as a ‘vector’ to transfer the malarial parasite into the human body, we need vectors to transfer the cut DNA into a host organism. Vectors are one of the important tools of biotechnology.

Plasmids make good vectors because they can replicate in bacterial cells, independent of the control of the chromosomal DNA. The vectors in use currently are engineered such that they help in easy linking of foreign DNA and allow selection of recombinants over non-recombinants. A vector needs the following features to enable cloning:

(i) Origin Of Replication (ori)

This is the sequence from where replication begins. Linking a piece of DNA to this sequence causes it to replicate in the host cell. This sequence also controls the copy number of the linked DNA. Therefore, the target DNA needs to be cloned into a vector whose ‘ori’ supports high copy number, in order to recover large amounts of the DNA.

In order to attach the foreign DNA to a vector, the vector should have a recognition site for a specific restriction enzyme. Multiple recognition sites will result in multiple DNA fragments, complicating the process of cloning. A vector has more than one antibiotic resistance gene. The foreign DNA is ligated into a restriction site in one of the antibiotic resistance genes. 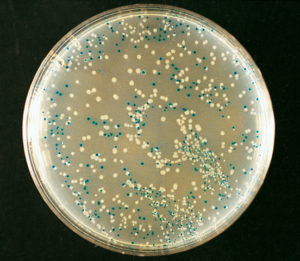 (iv) Vectors to Clone Genes in Plants and Animals

Long before us, bacteria and viruses knew how to transfer genes into plants and animals. For example, Agrobacterium tumifaciens, a pathogen on dicot plants, transfers ‘T-DNA’ that transforms normal plants cells into tumours. These tumours then produce chemicals that the pathogen requires. With better understanding, we have now converted these pathogens into useful vectors to deliver genes of interest to the plants or animals.

Now, the tumour-inducing (Ti) plasmid of Agrobacterium tumifaciens has been modified into a cloning vector. This vector is no longer harmful but is useful in delivering genes of interest to plants. Retroviruses transform normal cells into cancerous cells in animals. These have also been modified so that they are no longer harmful and can deliver genes to animals.

Some procedures that make the cells competent are treatments with a specific concentration of divalent cation like calcium. This makes it easy for the DNA to enter the cell wall through pores. Incubation of cells with the recombinant DNA on the ice, followed by heat shock at 42°C and another incubation on ice, enables the cells to take up the DNA.

There are several other methods to introduce foreign DNA into host cells. The ‘microinjection’ method involves injecting the recombinant DNA directly into the nucleus of an animal cell. The ‘bolistics’ or ‘gene gun’ method bombards plant cells with high-velocity microparticles of gold or tungsten coated with DNA. The last method uses ‘disarmed pathogen vectors’ (discussed above) to transfer the recombinant DNA into the infected host cells.

Q1: Which of the following sequences is not palindromic?

Sol: The correct answer is the option ‘c’. The sequence on the two strands is not the same when both are read in the same orientation i.e. in 5′ to 3′ direction or 3′ to 5′ direction.

Share with friends
Previous
Techniques in Biotechnology
Next
Biotechnology: Principles and Processes