Did you know that India is the largest producer of bananas and mangoes in the world? Also, it is the second-largest producer of wheat and rice. In fact, Agriculture has always been the backbone of our country’s economy. Ever since the Green Revolution, we have started cultivating a variety of crops. Let us educate ourselves about the most important crops grown in India.

A crop is a plant that is cultivated or grown on a large scale. In general, crops are grown so they can be commercially traded. In other words, a crop is any plant that is grown and harvested extensively for-profit purposes.

Two major types of crops grow in India. Namely, Kharif and Rabi. Let us take a look at these.

The word “Kharif” is Arabic for autumn since the season coincides with the beginning of autumn or winter. As cultivation of these crops happens in the monsoon season, another name for Kharif crop is monsoon crop. The Kharif season differs in every state of the country but is generally from June to September. We sow the crop at the beginning of the monsoon season around June and harvest by September or October. Rice, maize, bajra, ragi, soybean, groundnut, cotton are all Kharif crops. Let us take a detailed look at few of these, 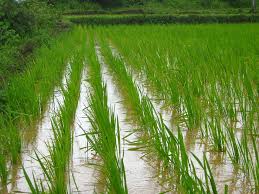 As mentioned before, India is the second-largest producer of rice in the world after China. India accounts for approximately 20% of the worlds rice production. It is arguably the most important agricultural crop that grows in the country. Rice is a staple food pan India, and its cultivation is also widespread across the country.

Rice prominently grows in high rainfall areas. It requires average temperatures of 25°c and a minimum of 100 cms of rainfall. It’s traditionally grown in waterlogged rice paddy fields. Northeast plains and coastal areas are the major rice-producing areas of the country.

After rice and wheat, maize is the most important cereal crop in India. It accounts for approximately one-tenth of the total agricultural produce in India. Cultivation of maize is focused in the regions of Andhra Pradesh and Karnataka. It requires temperatures in the range of 21°c to 27°c and rainfall of between 50 cms to 75 cms.

Learn Why Irrigation is necessary for agriculture and farming.

The Arabic translation of the word”Rabi”, is spring.  As these crops harvest in the springtime hence the name. The Rabi season usually starts in November and lasts up to March or April. Cultivation of Rabi crop is mainly through irrigation since monsoons are already over by November. In fact, unseasonal showers in November or December can ruin the crop. Farmers sow the seeds at the beginning of autumn, which results in a spring harvest. Wheat, barley, mustard and green peas are some of the major rabi crops that grow in India. India is the second-largest producer of wheat in the world. It is highly dependent on this rabi crop for its agricultural income. Wheat is a staple food among Indians, especially in the northern regions.

Wheat requires cool temperatures during its growing season in the range of about 14°c to 18°c. Rainfall of about 50 cms to 90 cms is most ideal. However, during harvesting season in the spring, wheat requires bright sunshine and slightly warmer weather. Uttar Pradesh is the largest wheat-growing state in India closely followed by Punjab and Haryana.

Learn more about Manure and Fertilizers

Mustard belongs to the ‘Cruciferae’ family. The oil extracted from mustard is edible, and so, in India, we use mustard for cooking purposes. It requires a subtropical climate to grow which is dry and cool weather. The temperature range to grow mustard is between 10°c to 25°c. Rajasthan has the largest production of mustard in India.

There is a short season between Kharif and Rabi season in the months of March to July. In general, Zaid crops are crops that grow in this season. Also, these grow on irrigated lands. So we do not have to wait for monsoons to grow them. Some examples of Zaid crops are pumpkin, cucumber, bitter groud.

Q: What is the first step in farming and agriculture?

Solution: Well it is not sowing of seeds. The first step of farming & agriculture is soil preparation.

Q1. What are the various types of crops grown in village Palampur?

In Palampur, all land is cultivated and no land is left idle. Farmers grow three different crops in a year with the help of well-developed system of irrigation and electricity facility:

(i) During the rainy season (kharif) farmers grow jowar and bajra. These plants are used as cattle feed.

(ii) It is followed by cultivation of potato between October and December.

(iii) In the winter season (rabi), fields are sown with wheat. The wheat produced is used for farmer’s family and to sell the surplus wheat at the market at Raiganj.

(iv) Sugar cane is harvested once every year. Sugarcane, in its raw form, or as jaggery, is sold to traders in Shahpur.

Q2. Growing two or three different crops in one agricultural field at the same time is called?

Intensive Subsistence Farming
This is yet another variation of subsistence farming. In this method, cultivation happens across larger areas of land and thus, it is labor intensive. Also, to get a high quantity of produce chemical fertilizers and different irrigation methods are used to yield more crops.

Q3. What are crops? Give three examples.

Answer: A plant which is cultivated in a large amount is called a crop. These are grown on a large scale and are sold commercially. Most crops are harvested for food to humans and livestock. It is also planted for the domestic purpose of consumption. Rice, wheat, oats, millets, fruits, vegetables are some examples of crops.

Q4. Growing different types of crops in a piece of land season after season is called?

Answer: The practice of growing different types of crops on a piece of land is called crop rotation e.g, one-year rotation crop maize-mustard, wheat-rice. It helps in increasing soil fertility. It reduces the need for fertilisers, also control pest and weeds. Several crops may be grown in succession with only one soil preparation.