Classification is a process in which closely resembling organisms are placed in a group. The groups which have similarities are placed into larger groups. The various grouping levels or ranks in classification are known as taxonomic categories. Let’s learn more about taxonomy in the section below.

Each category is referred to as a unit of classification or rank and is commonly called taxon. A taxon is a general term for grouping in a systematic classification. A taxon refers to a group of similar and genetically related individuals having certain characters different from other groups. For example, all the insects form taxonomy as they have some common characters which are different from other groups.

There are 7 major categories, namely the kingdom, phylum, class, order, family, genus and species. The sequence can be remembered by memorizing the sentence as a pneumonic. ‘Keep sports clean family gets sick’. 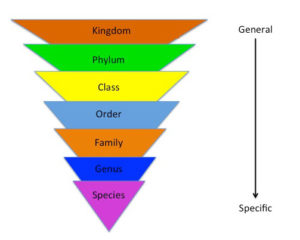 Species is a group of actually or potentially inbreeding population reproductively isolated from other such groups. It is the lowest taxonomic characteristics. It consists of individuals which have fundamental similarities and can be distinguished from other closely related species due to distinct morphological characters.

Genus is a group of species which are alike in broad features of their organization but different in detail. Species in a genus have a common ancestry. This may be the reason for their close similarities for example genus equals has many species like Cabelas for the horse; Vulgaris the ass zebra.

What are Taxonomical Aids

A family is a group of the related genus. They have still less number of similarities as compared to genus and species. Families are characterized on the basis of both vegetative and reproductive features of plant species example three different genus Solanum, petunia and the Torah at placed in the family Solanaceae.

In animals, genus Panthera including lion, tiger, leopard is put along with genus Felis in the family Felidae. All the animals like lion, tiger, and cats have some similarities but those similarities are not found in dog hence it is placed in another family Canidae.

The class is a group of related orders. For example order Primata comprising monkeys, gorillas and gibbons are placed in Class Mammalia along with order Carnivora which includes animals like tiger, cat, and dog all having a common feature that is hair on skin and milk glands.

A phylum is a group of related animal classes. Birds along with mammals are members of the same phylum Chordata because of the feature of the presence of notochord and dorsal hollow nerve cord. In-plant Classes with a few similar characters are arranged in a higher category of Division.

The kingdom is the highest category in biological classification. It is a group of closely related organisms. Example all plants have common features of the autotrophic mode of nutrition and the presence of cell wall made up of cellulose. Hence they belong to the kingdom Plantae. Taxonomists have also developed subcategories in this higher key for more sound and scientific placement of various taxa.

Question: As we go from species to the kingdom in a taxonomic hierarchy, the number of common characteristics

Answer: a. will decrease

Question: Brinjal and potato belong to the same genus Solanum, but to two different species. What defines them as separate species?

who is the author?

Living things still be the curious for many people. It is like the way we asked “what is it like to live in somewhere …” Thanks for interesting share!