This is a phylum that contains marine deuterostome animals. They are sometimes considered as the sister group of phylum Echinodermata. Phylum Hemichordata is a small phylum with only a 100 known species, with animals having a worm-like appearance. Some species may be solitary or some occur in colonies. Let us study them further. 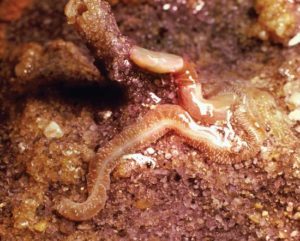 These animals are also called as Acorn Worms. They were initially grouped under Phylum Chordata. But, research has proven that none of these organisms does not have a post-anal tail or even the notochord, which is a distinguishing feature of chordates. Hence, these animals have been given a separate phylum, called the Hemichordata.

They are typically found in oceans, living on the seafloor. They vary greatly in size, ranging from a few millimetres to almost one and a half meters.  Balanoglossus gigas, a hemichordate species can be of 1.5 meters in length. These species feed on small organic particles. They can be either filter feeders or substrate eaters.

Most of the organisms belonging to this phylum have a modified proboscis, due to which they have got the name Acorn worms. These animals show a few chordate characteristics but are not completely chordates. Hence they have been given the name Hemichordata (Half chordates). Another notable feature of these organisms is the threefold division of the body, with the preoral lobe, collar, and a trunk. The collar bears the tentacles in a few species. The trunk has the digestive and reproductive organs. 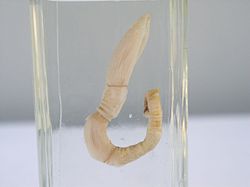 Solved Questions For you

Q: Balanoglossus belongs to which phylum?

Ans: It belongs to Phylum Hemichordata.

Q: In hemichordates, the body is divided into three regions. Name them.

Ans: The three regions of the body are Proboscis, Collar and Trunk.

the answer is B

Have you read biology in your life before?

A) only vertebrate chordates