In simple words, an abbreviation is a shortened, reduced or contracted word or phrase. Most abbreviations start with a capital letter and end with a period (full stop).

Learn more about Spelling and Pronunciations here in detail. 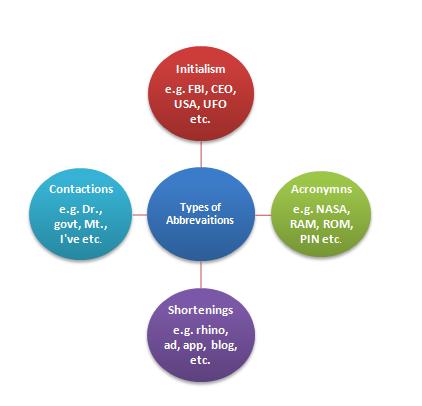 What is an Acronym?

An acronym is a form of abbreviation. There is some difference between the two. Abbreviations are the shorter version of a word or phrase.

An acronym is a specific type of abbreviation. It is formed from the first letters of a multi-word term, name or phrase.

Example of abbreviation: Important is written as imp.

Abbreviation of Acronym: FBI stands for Federal Bureau of Investigation.

Initialism of acronym is capital, whereas abbreviation can have both capital and small letters.

There are some rules for making abbreviations. They are:

If a person is using an abbreviation for the first time, he must place it within parenthesis after the term. Consider an example of Indian Institute of Technology (IIT).

Proper nouns are abbreviated with capital letters while the common nouns are not. For example, RBI stands for Reserve Bank of India.

One can abbreviate the titles or professions while using them with the full name or initials. Dr. Mehta is one such example.

No need of periods (.) for some abbreviations to indicate dates. 400 BC, 400 AD are such examples.

One can abbreviate months and days of the week while using them with the full date. For example, Dec. 5, 1924

One can abbreviate the clock time. A person can use capital letters and with or without periods. Use of periods is necessary when using lowercase letters. One cannot use an abbreviation when no time is attached. For example, at 8 AM, 7 PM etc.

One can abbreviate some scientific or measurement terms. For examples, Kilogram is abbreviated as kg. Kmph stands for kilometer per hour.

The abbreviation of the word number is No. Sometimes a person can also use the symbol # to represent it. Street No. 89 denotes street number 89.

Name of cities, towns, country can also be abbreviated. One can also abbreviate the names of directions also. For example, LA stands for Los Angeles, N.W. stands for North–West etc.

A person can also abbreviate some Latin terms. For examples, e.g. stands for example; i.e., stands for that is or in other words etc.

One should not abbreviate terms only to save time and space. For example using nite for night, gud for good etc.

If an abbreviation is coming at the end of the sentence, use only one period. For any interrogative or exclamatory sentences use the respective symbols after the period in the abbreviation.

Use lowercase s (and not ‘s) for the plural form of an abbreviation. CDs, DVDs, PCs, TVs etc. are some of the examples.

Problem: What is the full form of CBI?

Problem: What can be the abbreviation of ‘Industrial Credit and Investment Corporation of India’?