Temperature and Rate – the Relationship We can explain the dependence of the rate of a chemical reaction on temperature by Arrhenius equation. where A is the Arrhenius factor or the frequency factor. It is also known as the pre-exponential factor. This constant is specific to a particular reaction. R is the gas constant and Ea is the activation energy which we measure in joules/mole.

According to the Arrhenius equation, a reaction can only take place when a molecule of one substance collides with the molecule of another to form an unstable intermediate. This intermediate exists for a very short time and then breaks up to form two molecules of the product. The energy required to form this intermediate is known as activation energy (Ea). 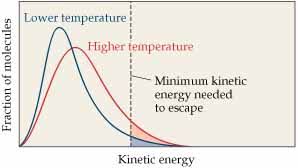 Increasing the temperature increases the fraction of molecules, which collide with energies greater than the activation energy Ea.

Temperature dependence of Rate of Reaction in Arrhenius Equation

In Arrhenius equation, the factor e -Ea/RT  corresponds to the fraction of molecules colliding with activation energies more than Ea. Taking natural logarithms of both sides of the equation I, we get,

At temperature T1, equation II will be

At temperature T2 , equation II will be

Subtracting equation III from equation IV, we get

Q: Why does the rate of a reaction increase when the temperature increases?