The knowledge about atoms does form the basis for further concepts in chemistry. Just like bricks form a variety of structures, atoms lead to the formation of molecules and compounds that are part of matter around us. Let us try to get a fair idea about the different formations of atoms.

Table of content
1 Suggested Videos
2 Element
2.1 Browse more Topics Under Atoms And Molecules
2.2 Video on Element Names And Their Symbols below
2.3 Molecule
2.4 Watch Videos on Molecules –
2.5 Compound
3 Difference Between a Compound and Molecule
4 Question For You

You can call an element ass the fundamental substance which consists of a single type of atom. Furthermore, elements comprise of smaller particles and can either be synthetic or man-made. The arrangement of elements in the periodic table is planned on the basis of the number of protons counted in an increasing order. 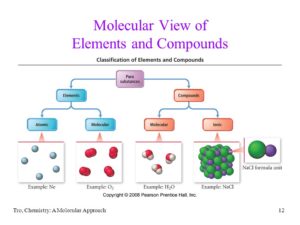 Also, when atoms are differently arranged in an element holding the number of protons, one would get different versions of that element. Example: both diamond and graphite are elements of carbon; however, they look quite different from one another.

Video on Element Names And Their Symbols below

A molecule can be termed as the smallest unit associated with a chemical compound. It delivers the same chemical properties of that particular compound. Since molecules are built out of atoms which are jointly held via chemical bonds, there are chances of significant variance in terms of size and complexity.

For example, oxygen holds a molecular formula O2. Do we consider it as a molecule or compound? Whenever two or more atoms of the same element merge together, we tag them as molecules. Hence, O2 stays as an oxygen molecule.

Remember that, the chemical formula for water is H2O. In this note, water is made from 2 hydrogen atoms and 1 oxygen atom. Two different elements combine, giving birth to a new substance called as water. Hence, those substances made by the merger of two or more types of elements are Compounds.

Atoms present in a compound are chemically connected and hence cannot be separated easily. Similarly, the chemical formula for carbon dioxide is CO2, and it is formed using two elements, namely carbon and oxygen. Some more examples of compounds include table salt (NaCl), chalk (CaCO3) and water (H2O).

Difference Between a Compound and Molecule

To be precise, a compound is basically a substance which is composed using two or more different elements. Table salt (NaCl), Water (H2O), carbon dioxide (CO2), chlorophyll (C55H72O5N4Mg) etc., are several examples of compounds. These are called as compounds since each of them contain more than one type of element.

On the other hand, nitrogen gas (N2), as well as buckminsterfullerene (C60), cannot be classified as compounds. This is because they only contain a single type of element. For precise knowledge, something which is a molecule doesn’t depend on the type of bond created when atoms join together.

To be clear, electrons are permitted to be shared between atoms or electrons can be totally removed from a single atom and transferred to another. Keep a note that, molecules contain molecular bonds. N2 can be seen as a molecule since the bond formed between the nitrogen atoms depicts the molecular bond.

Q. Elaborate the difference between molecular formula and empirical formula with Example.