Smelting, a method by which a metal we separate from its material, either as a component or as a pure mixture. Moreover, by heating beyond the melting point, typically in the presence of oxidizing agents such as water or reducing agents such as coke.

Copper (around 5000 BCE) was possibly the first element that they find in the ancient Middle East. Then it precedes by copper, gold, and silver. They design furnaces with a forced-air draft to attain the high temperatures that they need for smelting; still, higher temperatures were necessary for steel. Smelting was, therefore, a major achievement in engineering. 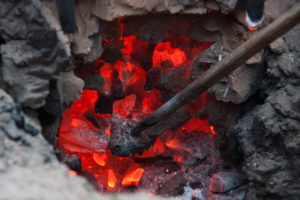 Metal extraction process in which ore is heated at a high temperature in an enclosed furnace (usually mixed with purifying and/or heat generating substances such as calcareous and coke).

Lighter mineral materials (impurities called slag and tailing) rise to the top after a reduction process (see reduction) and float on the molten metal. Smelting is the opposite of an oxidizing reaction to roasting.

We use a reverberatory furnace in the industrial smelting of copper. Also, we pour concentrated ore and a liquid, normally calcareous, into the rim, and molten matte— a mixture of copper, steel, and sulfur— and pull out the slag from the bottom.

In another (converter) furnace, a second heat treatment is needed to remove the iron from the mat. In modern ore treatment, in order to concentrate the metal ore as much as possible, different preliminary steps are usually performed before smelting.

Besides, in the smelting process, they mix material with oxygen. For example, iron oxide — which we heat to a high temperature, allowing the oxide to bond with the hydrogen in the gas. Also, it flees as carbon monoxide and carbon dioxide. After that, they extract other impurities by applying a flux with which they combine to form a slag, which we collectively call gangue.

A process called “roasting” drives out the unwanted carbon or sulfur in the case of carbonates and sulfides, leaving an oxide that can be directly reduced. In an oxidizing environment, usually, they perform roasting. A few practical examples:

Carbon dioxide and water release into the atmosphere. Also, it leaves oxide from copper (II), which we can reduce directly to the copper.

Galena is primarily lead sulfide (PbS), the most common lead mineral. It oxidizes the sulfide to form a sulfite (PbSO3), which decomposes thermally into lead oxide and sulfur dioxide gas. (PbO and SO2).

Q-1: Which process removes the unwanted carbon or sulfur in the case of carbonates and sulfides?

Ans: A process called “roasting” drives out the unwanted carbon or sulfur. However, in the case of carbonates and sulfides, leaving an oxide that can be directly reduced.

Q-2: What is designed for smelting that can also be necessary for high temperatures of steel?

Ans: They design furnaces with a forced-air draft to attain the high temperatures needed for smelting; still higher temperatures were necessary for steel.

Share with friends
Previous
What is Substrate - Definition and Examples
Next
Order of Reaction - Example and How to Determine it?