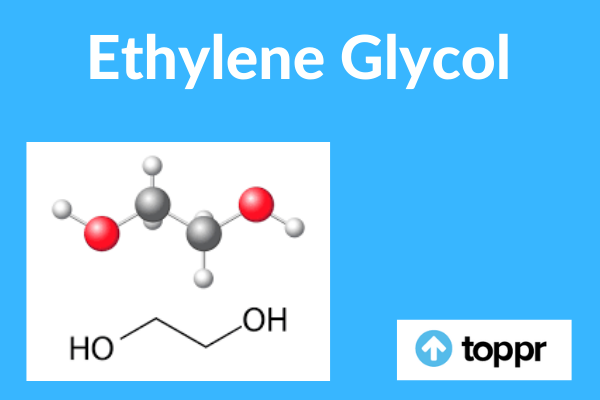 The Chemical Reaction of Ethylene Glycol

Ethylene glycol is in use as a protecting group for carbonyl groups. Treating a ketone or aldehyde with ethylene glycol in the presence of an acid catalyst gives 1,3-dioxolane. This is resistant to bases and other nucleophiles. The 1,3-dioxolane protecting group is thereafter removed by further acid hydrolysis processes. For example, isophorone is protected with the help of ethylene glycol with p-toluenesulfonic acid. Water is removed by an azeotropic distillation process to shift the equilibrium to the right.

Ethylene glycol is moderately toxic for humans. The major danger is because of its sweet taste, which attracts children and animals. Ethylene glycol upon ingestion is oxidized to glycolic acid. This, in turn, oxidizes to oxalic acid, which is toxic. It and its toxic byproducts first affect the central nervous system of the body, then the heart, and finally the kidneys. Ingestion of sufficient amounts of ethylene glycol is fatal if untreated. Several deaths are recorded annually in the U.S. alone because of ethylene glycol.

It is useful in the following manner:

Answer: Ethylene glycol or ethane-1,2-diol, is a member of the organic compound family glycol. Glycol is alcohol on the nearby carbon atoms, with two hydroxyl groups. The common name ethylene glycol means “ethylene derived glycol.”

Answer: Ethylene glycol comprises polar O-H groups. These groups are polar since oxygen is much more electronegative than hydrogen, and therefore appears to polarize the pair of electrons in the O-H bond.

Share with friends
Previous
Filtration
Next
Cathode and Anode