Platinum is a metal of the platinum group of elements and group 10 of the periodic table of elements. It corresponds to period 6. Platinum consists of six present isotopes. It’s one among the rarer elements in the crust, with a mean abundance of roughly 5 μg/kg. Platinum is an element with the symbol Pt and number 78. It’s a precious, silverish-white transition metal. 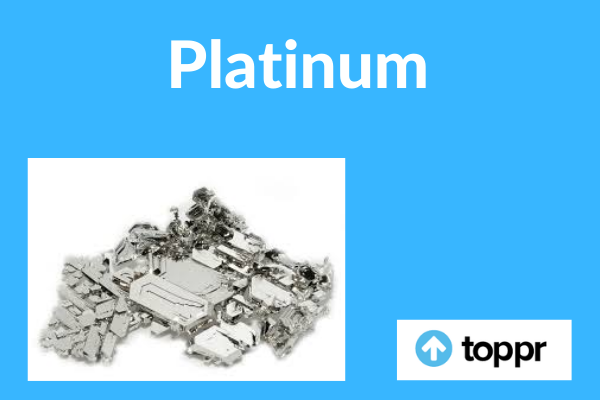 Among the metals, platinum is one of the smallest reactive metals. It is highly resistant to corrosion, even at high temperatures, and is therefore a metallic element. Consequently, platinum is usually found chemically uncombined as native platinum. It occurs in some nickel and copper ores alongside some native deposits, mostly in South Africa, which accounts for 80% of the planet production. As platinum occurs naturally within the alluvial sands of varied rivers, pre-Columbian South American natives were the first to use it to make artefacts.

Platinum is in use for catalytic converters, laboratory equipment, electrical contacts and electrodes, platinum resistance thermometers, dentistry equipment, and jewellery. Being an important metal, it results in health problems upon exposure to its salts; but thanks to its corrosion resistance, metallic platinum has not been linked to adverse health effects. Compounds containing platinum, like cisplatin, oxaliplatin and carboplatin, are also in use in chemotherapy against certain sorts of cancer.

Archaeologists have found traces of platinum within the gold that have been in use in the ancient Egyptian burials as early as 1200 BC. The metal has been employed by pre-Columbian Americans near modern-day Esmeraldas, Ecuador to supply artefacts of a white gold-platinum alloy. To figure the metal, they did combine gold and platinum powders by the sintering process. The resulting alloy is thus soft enough to shape with tools. The platinum in use in such objects isn’t the pure element but a mixture of the group metal, with small amounts of rhodium, palladium, and iridium.

European discovery: The primary ever reference about platinum we see in European culture is within the writings of the Italian humanist Caesar Scaliger in 1557. The writing has an outline of an unknown metallic element found between Darién and Mexico, “which no fire nor any Spanish artifice has yet been ready to liquefy”. Antonio de Ulloa is credited in European history as the inventor of platinum. In 1748, Antonio de Ulloa laid the formation of the primary mineralogy lab in Spain and has been the primary to systematically study platinum. In 1752, Henrik Scheffer naming it “white gold”.

Oxides – Platinum(IV) oxide, \(PtO_{2}\), also referred to as ‘Adams’ catalyst’, is a kind of black powder that’s soluble in potash (KOH) solutions and concentrated acids. \(PtO_{2}\) and PtO both decompose upon heating. Platinum(II,IV) oxide, \(Pt_{3}O_{4}\), forms within the following reaction:

One suitable method for purification of the raw platinum, which contains platinum, gold, and other platinum-group metals, is to process it with nitrohydrochloric acid. In this process platinum, palladium, and gold dissolves, whereas osmium, iridium, ruthenium and rhodium stay unreacted.

Q.1. How can I tell if my ring is real platinum?

Answer – All platinum jewellery has a marking to show its authenticity. One can look for the words “Platinum,” “PLAT,” or “PT” or preceded by the numbers “950” or “999.” These numbers refer to the purity of the platinum, with “999” as the purest.

Q.2. Does Platinum stick to a magnet?

Answer – Gold, silver, and platinum are not magnetic. One must know that if any metal attracts the magnet, then it must be an alloy mixture and not a precious metal.

Q.3. Does platinum wear away?

Answer – Platinum is very durable. Whereas other precious metals, if scratched, lose metal, and thus wear down. Platinum does so at a much slower rate.

Name a meatal which we can cut with a knife

It can be done, but… poor knife

why is everyone here Indian

Lithium, potassium and sodium are the metals which can cut with a knife

Alkali metals such as (lithium,sodium,potassium) are so soft that they can be cut with a knife.

my dick as well

…with whom specially metals 3.point with whom it is related from non metals

Name a non metal which can cut a knife

What’s the. Most important chemical property of nonmetals

They tend to have low melting and boiling point

They can easily gain electrons.

Name the good conductor of electricity is non metal

Graphite , an allotrope of carbon which is an exception