From left to right in a period atomic size, electropositive nature, metallic nature, basic nature of oxides all decreases, and electronegative nature, non-metallic nature, acidic nature of oxides all increases. Similarly, all the elements of a group of the periodic table have the same number of valance electrons hence have similar chemical properties. Reactivity of metals increases down the group. 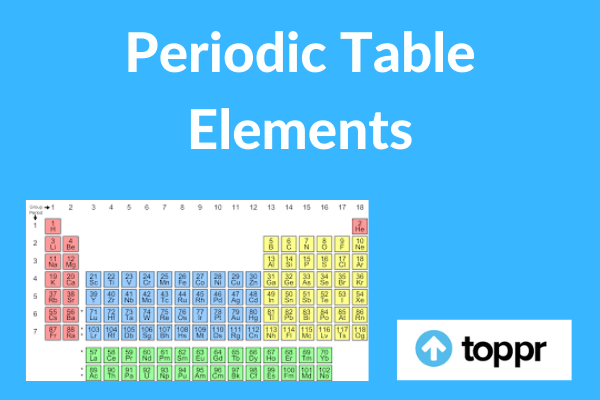 According to Mendeleev all the physical and chemical properties of the elements are the periodic function of their atomic masses. Mendeleev arranges all the known elements in increasing order of atomic masses and named them periodic table elements. In Mendeleev’s periodic table total numbers of periods are seven and the total numbers of groups are nine. This periodic table has some defects as elements that are chemically similar are placed in the different groups. Copper, silver has no resemblance with alkali metals but they have been placed together.

According to Moseley, all the physical and chemical properties of an element are the periodic function of its atomic numbers. In the modern periodic table, there is a total of seven periods and eighteen groups. In the periodic table elements, two horizontal rows contain fourteen elements each at the bottom. The first row contains fourteen elements from atomic number 58 to 71 and it is known as the lanthanides series. Elements in a period have the same number of orbit but in a group, it changes.

Copper: The symbol of copper is Cu and the atomic number is 29. The density of copper is 8.96. Copper is a soft but tough material. It is mixed with tin to form bronze.

Nickel: The symbol of nickel is Ni and the atomic number is 28. Nickel is located in the fourth period on the periodic table. It is useful in making coins and it is mixed with copper to form monel which is an alloy of copper and nickel.

Zinc: The symbol of zinc is Zn and the atomic number is 30. Zinc is in use to make zinc oxide and also as an additive to the rubbers.

Sodium: The symbol of sodium is Na and the atomic number is 11. It is an alkali metal and it has a very low melting point. Sodium reacts with water, ice, rapidly to form sodium hydroxide. It improves the structure of soaps, purification of molten metals. Sodium chloride is a common compound of sodium which widely in use in daily life and also as salt in fertilizers.

Q.1 Write the total number of elements present in the periodic table.

Q.2: Write all the groups of metals according to the periodic table.

Answer: According to the periodic table most of the elements are metals. Alkali metals, alkaline earth metals, basic metals, transition metals, lanthanides, actinides all are the group of metals.

Answer: Mendeleev arranges the elements based on their atomic weight while in the modern periodic table all the elements are placed according to their increasing atomic numbers.