Have you ever wondered what happens when metals and non-metals react? They form ionic bonds which form ionic compounds. An ionic bond is the electrostatic force of attraction between two oppositely charged ions. Let’s find out more about it.

What are ionic compounds? For e.g.  Salt (NaCl) is an ionic bond that consists of Sodium (Na) which is a metal with positive charge combines with Chlorine (Cl), a nonmetal with a negative charge. Another example of an ionic bond is Magnesium Hydroxide Mg(OH)2 which a combination of Magnesium (Mg) and Hydroxide (OH). Here, Magnesium is a metal with cations and Hydroxide is a nonmetal with anions. Iron Oxide (Fe2O3) also known as rust is also an ionic bond, it has metallic compound Iron (Fe) which contains positively charged cations and it has nonmetallic compound Oxygen (O) which contains negatively charged anions.

Learn more about Physical Properties of Metal and Non-Metals here in detail. 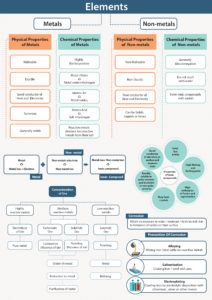 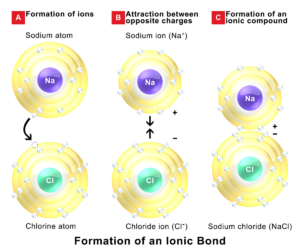 If Sodium and Chlorine reacted then the electron lost by sodium would be taken by Chlorine. After this process, the chlorine atom would have a negative charge, because it would have seventeen protons in its nucleus and there would be eighteen electrons in its K, L and M shells. This gives the Chlorine atom a negative charge. Hence, the negatively charged Chlorine and positively charged Sodium creates an Ionic bond or an Electrovalent compound.

Learn more about the Occurrence of Metals here.

Solved Example for you :

Q: State whether the following statement is true or false. Sodium Chloride has a higher melting point than Magnesium Oxide. Justify your answer.

Ans.  The following statement is True. Magnesium Oxide (MgO) has a higher melting point than Sodium Chloride (NaCl) which is around 2,800 degrees Celcius. This is because its Mg2+ and O2- ions have a greater number of charges, and so form stronger ionic bonds, than the Na+ and Cl– ions in Sodium Chloride. Because it stays solid at such high temperatures, magnesium oxide remains non-conductive and is used for high temperature electrical insulation.